Navalone (also written as Navarone), is the first of three monochromatic arcade games released by Namco, in early 1980; the other two are Kaitei Takara Sagashi (which was originally developed by K. K. Tokki as a prototype) and SOS. It is a fixed/multi-directional shooter in which the player controls a boat that must move around the edge of an island trying to shoot the pellets, mines and central skull while avoiding the bullets fired by the indestructible gun turrets. All components are explained below. 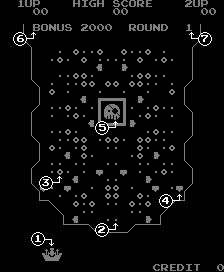