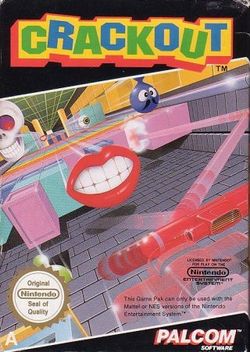 Crackout is the title of the European release of a paddle/breakout game originally released for the Famicom Disk System known as Nazo no Kabe - Block Kuzushi, which is translated as "The Riddle of the Wall: Block Destroyer". The game was developed by Konami, and while it is modeled heavily after the wall crash genre defining Arkanoid, Konami actually managed to publish this version just a few days before Taito published their own conversion of Arkanoid for the Famicom in late 1986

While Nazo no Kabe has a lot in common with Arkanoid, it departs from it in slight ways. It introduces concepts such as mid-bosses that must be hit multiple times before they are eliminated, something which is only seen at the very end of Arkanoid. Power-ups are provided by destroying the interfering monsters, and not the bricks. Throughout a few of the stages, letters can be revealed by various methods. The letters must be written down and unscrambled in order to enter the final code that will unlock the ending of the game.

A prototype was developed for the United States, but never released. Instead, the game was converted to the cartridge format and released for PAL NES systems under the name Crackout throughout Europe as well as Australia. It replaces the disk saving feature with a password system that allows players to continue where they left off the last time that they played. In 2001, Nazo no Kabe was released for play (with simplified graphics) on various cell phones in Japan.