From StrategyWiki, the video game walkthrough and strategy guide wiki
(Redirected from Nazo no Murasame-Jou)
Jump to navigation Jump to search
The Mysterious Murasame Castle | Table of Contents | Gameplay | Walkthrough 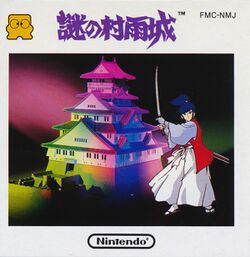 The Mysterious Murasame Castle (謎の村雨城, Nazo no Murasame-jō?) is a video game developed and published by Nintendo for the Famicom Disk System. It was originally released only in Japan on April 14, 1986. It was the second original title released for the Famicom Disk System, after The Legend of Zelda. On August 10, 2004, it was re-released for the Game Boy Advance as part of the Famicom Mini Series 3: Disk System Selection series. It finally received a worldwide release in 2014, on the Nintendo 3DS' Virtual Console.

Its gameplay can best be compared to The Legend of Zelda, although the focus is on action rather than puzzle solving. You play as Takamaru, a master swordsman. You must play through an outside area, followed by a castle area in order to defeat all four Daimyos and collect the colored orbs that they possess, in order to defeat Murasame itself. The gameplay is far more linear than in The Legend of Zelda. You must fight through hordes of ninjas and monsters, collecting different weapons and powerups as you go along.

There is very little Japanese text in the game, and the game is entirely playable by any non-Japanese speaker. Nevertheless, a translation patch has been made for this game that will change what little there is to change, including the title screen, and some of the icons at the top of the screen. It can be found here.

It is the Edo era, in the time when the fourth generation Shogun Tokugawa Ietsuna ruled Japan. There was a castle known as Murasame Castle in the Yotsuya district. It was celebrated for the enormous stone image of "Murasame"

Murasame Castle and its town enjoyed peaceful everyday life. But on a certain stormy night, the heavens were pulled and with a tearing thunder, a mysterious object shining in gold fell to Murasame Castle. A strange scream rose from inside the castle. A mysterious unnatural living object gave life to the Murasame statue and took control of the castle.

The mysterious object not only took control of Murasame Castle, but also the Daimyos of the blue castle, the red castle, the green castle and the pink castle which were nearby. It handed each one a mysterious ball of 4 different colors. The Daimyos who were controlled by wicked power made the troops and demons torment the people.

The shogunate began to hear of the rumors about the accident at Murasame Castle. They needed to verify the authenticity of rumor, and if the rumor was indeed true, they knew that they must defeat Murasame, the root of the disaster. They secretly sent young swordsman Takamaru, a skilled instructor, into Murasame Castle.

But, the mysterious lifeform in Murasame knew of this. When Takamaru appears in Edo, the assassins of the Murasame attacked simultaneously. But, Takamaru, who was the shogunate's foremost swordsman, scattered the assassins. Takamaru arrived at the blue castle town, one of four castles which protect the Murasame Castle…