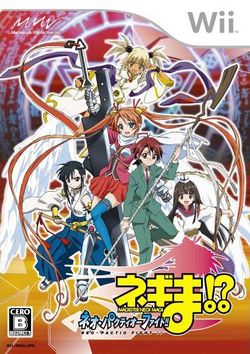 Negima!? Neo-Pactio Fight!! (ネギま!? ネオ·パクティオーファイト, Negima!? Neo·Pakuteioo Fuaita!!?) is a game for the Wii based upon the popular Japanese manga, Mahou Sensei Negima. It was released in Japan only on June 12, 2007. It is the third Negima!? game to be released on a Nintendo game console (After Mahou Sensei Negima! and its sequel on the GBA), and the first console Negima game not published by Konami.

Mahō Sensei Negima!? Neo-Pactio Fight!! is a 3D fighting game. The arenas in the game are in full-time 3D, and the characters can move in any direction, as well as jump. Up to four players can play in Battle Mode. Controls are operated by using both the Wii Remote and Nunchuk (the Classic Controller and Wii Remote (used sideways) are also supported as control methods). Certain attacks and moves involving quickly moving the Wii Remote left and right or up and down. By getting a Pactio Card, one can activate a Pactio transformation like in Negima!?, randomly (though possible to control) becoming one of the three different forms: Armor (powerful version of your character, using a very powerful attack), Cosplay (character dresses up in costumes, and boosts the characters abilities), and Suka (or "Miss", in which your character is transformed into a weak super-deformed animal, such as a Kappa in Kaede's case).

There is also a minor issue regarding the katakana of the title: パクティオーファイト (Pactio Fight) contains a line between the o and the fu. This line can either be an English hyphen symbol (-), separating the words, or it could be a katakana chōonpu (ー). The chōonpu is also likely because the furigana on the title does not include this line as a symbol like the furigana does with the dot, exclamation marks, and question mark. However, it could also be argued that since the English furigana depicts "Magister Negi Magi" without the "!?" in the Japanese title, that the whole scheme is not standardized and thus an English hyphen could be acceptable. The only way to answer that question is to speak to one of the developers. This means that "Negima!? Neo·Pakuteioo Fuaita!!" is acceptable, as well as "Negima!? Neo·Pakuteio-Fuaita!!". It also means that the English title can also be "Negima!? Neo-Pactio-Fight!!".

The title on StrategyWiki substitutes a hyphen for the dot between Neo and Pactio because the dot is not available on standard English keyboards.