From StrategyWiki, the video game walkthrough and strategy guide wiki
(Redirected from Nemesis 2)
Jump to navigation Jump to search 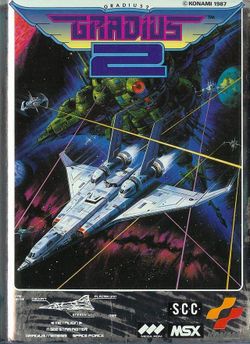 This guide is for the MSX sequel to Gradius. For the arcade sequel, see Gradius II: Gofer no Yabou.

Gradius 2 (グラディウス2, Gradius 2?) is a side-scrolling shoot 'em up game released for the MSX computer in 1987 by Konami. The game is a sequel to Nemesis, the MSX version of Gradius, but is unrelated to the arcade game Gradius II: Gofer no Yabou (which used the Roman numeral 'II'). It was released as Nemesis 2 in European regions. This game is the first title that Konami chose to include their custom sound chip known as the SCC, for enhanced sound capabilities above and beyond what the MSX was capable of.

In a departure from other games, instead of controlling Vic Viper, the available ship is called Metalion. Unlike other titles, this game has a heavier focus on story, which is told by cut-scenes. The gameplay is mostly unchanged from the rest of the series, though there are some powerups that temporally gives the ship some enhancements. Also, when the bosses are being defeated, if the Metalion flies where they are, a mini-level can be accessed in order to obtain new permanent upgrades, if the mini levels are successfully cleared.

This version was ported to the Sharp X68000 computer under the name Nemesis '90 Kai, with some graphical and aural enhancements, as well as additional stages which did not appear in the original. An unofficial port known as Nemesis '94 (or '95) was developed which is more faithful to the original. Another enhanced port was released for the PSP in the compilation title Salamander Portable, which emulates the original MSX version, not as it was published, but as if it were made available for the more powerful MSX2+, which allows for more simultaneous colors on the screen, and smooth scrolling for a better play experience.

The Director General of Space Science Agency Dr. Venom was exiled to Planet Sard for a failed coup d'état. In the year 6665, he escapes and invades Planet Nemesis and the seven planets it controls with the help of Bacterion. The Nemesis High Council sends James Burton, ex-pilot of the Vic Viper, to pilot Metalion and attack Dr. Venom and the Bacterion invaders. The game takes place during the year 6666.