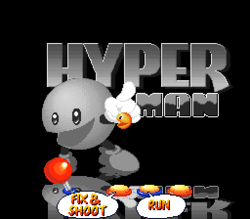 New Hyper Man is a multi-directional shooter arcade game that was released by SemiCom in 1997 as part of XESS: The New Revolution (even though the title screen only reads Hyper Man, which is what 1995's Hyper Pac-Man had been renamed to for that compilation); as with the aforementioned "Hyper Pac-Man", it stars Namco's signature character, Pac-Man (but, much like that game, it is not officially part of the Pac-Man series). The players must utilise two 8-way joysticks to direct two Pac-Mans around ghost-regenerator- and pellet-free mazes (but if you let go of them, your Pac-Man will stop moving), along with two buttons to fix onto and spit lasers at the enemies (which are those two types of unnamed identikit ghosts from "Hyper Pac-Man", ducks, armadillos and slimes), as well as run - and there are a total of forty-five levels to get through (four of which happen to be boss ones).