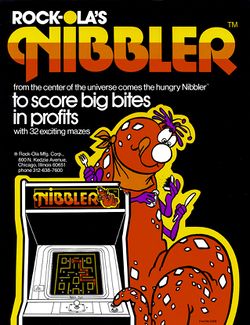 Nibbler is an arcade game that was released by Rock-Ola in 1982 and licensed to Taito Corporation for Japanese manufacture and distribution; it uses a Motorola M6502 microprocessor, with a custom sound chip and Texas Instruments SN-76477 (all running at 930 KHz). The player must use a 4-way joystick to take control of the eponymous "Nibbler" (who is a red snake with white spots - despite the flyer and title screen depicting him as a four-armed worm-like creature) and direct him around thirty-two unique mazes, to eat the various items of food in his path. However, every time he eats one, his body will grow longer, which makes it easier to run into his own tail; if he should do so, he will lose a life and have to start the stage over again. As a result, the game can be seen as a distant precursor to that classic Nokia mobile phone game Snake - along with its two sequels, Snake II and Snake III.

This game was also the first to have a score display that rolled over at 1,000,000,000; Rock-Ola had offered a free cabinet to the first person to make the score roll over, and the early favourite was Tom Asaki, who had come close to doing so in several attempts at Twin Galaxies Arcade, Ottumwa, Iowa (on one of these, the joystick broke after he had reached 793,000,000 points). However, Tim McVey eventually did it with a score of 1,000,042,270 points after seven attempts - and the day of Saturday 28th January 1984 was therefore declared "Tim McVey Day", in Ottumwa. The food items are worth 10 points multiplied by the current stage's number and the time bonus is the remaining value on the timer multiplied by the stage's number; this is why a score can be so high when you get far enough.