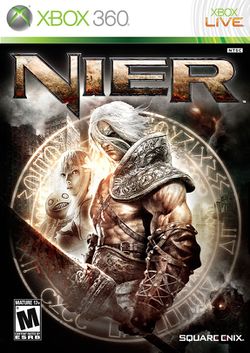 Nier is an action role-playing game developed by Cavia and published by Square Enix. It was released in April 2010 for the Xbox 360 and PlayStation 3. In Japan the two platform versions were named as Nier Gestalt​ (ニーア ゲシュタルト, Nīa Geshutaruto?) for Xbox 360 and Nier Replicant (ニーア レプリカント, Niia Repurikanto?) for PlayStation 3. The major differences between the two versions are the player character Nier's appearance and his relationship with the character of Yonah. In the west, both platform versions are based on Gestalt.

Players take control of Nier, who uses his sword to perform combo attacks on his enemies. He is also able to use a magical book to shoot projectiles at enemies for a short period of time. As the player advances through the game, more powers as well as a variety of different weapons will be at the disposal of the player.