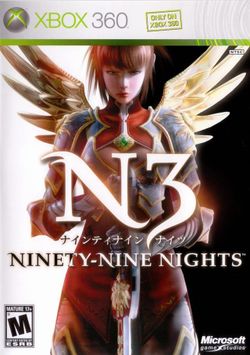 Ninety-Nine Nights, (Korean: 나인티-나인 나이츠, Japanese: ナインティ ナイン ナイツ), a.k.a. N3: Ninety-Nine Nights or simply N3, is a fantasy hack and slash game developed for the Xbox 360 by an alliance between Q Entertainment and Phantagram. Video game designer Tetsuya Mizuguchi served as producer for the game.

The game features hundreds of enemies onscreen at any given time, and borrows heavily from other video games of the genre, most notably from the Dynasty Warriors and Kingdom Under Fire series.

A sequel, Ninety-Nine Nights II was announced at Microsoft's Tokyo Game Show press conference in 2008, and released in 2010.