This scene is arranged similar to Scene 1-B, except that there are two notable differences. First, all of the enemies are Kabukis. Second, for some strange reason, there is a bug in the game that causes all of the sprites on the screen to leave trails behind them, creating a very strange effect on the screen by the time you manage to complete the stage. Don't let it distract you too badly, focus your efforts on any Kabukis that are moving and bomb them as rapidly as possible.

Scene 26 is a long horizontal journey to the exit on the far right side. Throughout the scene, you will be attacked by Lion Dances, along with the occasional Eyeball. They will leave fireballs suspended in the air any time you intercept their breath attack. Clear away only those Lion Dances which interfere with your progress, and ignore the rest. Leap off the cliffs to the areas below to put some distance between you and any Lion Dances nearby.

Scene 27 is arranged just like Scene 2-C. However, all of the enemies are Armors, and that's going to make clearing it a lot more difficult. Unlike previous Armor scene 23, the ledges aren't very spaced out, which will make stunning the armors harder, as well as getting clear of them when they begin to fire arrows. You should try to isolate one or two armors away from the rest of the group and take them out one at a time instead of throwing yourself into the middle of a huge fight. The fireball item here is only so helpful, since you must still stun the Armors before you can kill any of them.

If you didn't successfully complete challenging bonus scene 21, you'll have another chance to try all over again. 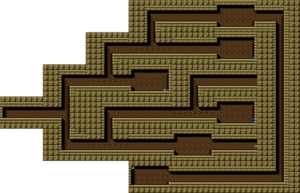 The scene will not only test your knowledge of the game, but also your willpower to struggle through it. The scene contains many branching pathways. In order to complete the scene in the quickest amount of time, it is recommended that you always travel up whenever you have the opportunity. Failure to do so will result in reaching a dead-end. Since there are many powerful enemies in the larger rooms, you don't want to face any more than you have to.

Before you reach the long shaft that you must fall down on the far right side, you must wall bounce up several shafts. It is very important to be prepared for whatever might be above you as you rise. Often times, bats will be flying about, and you won't have much time to react to them. Having bombs ready to toss out can save you. Other times, a Half Catfish may be waiting on the ledge. If you don't toss out a bomb quickly enough, they will run up to you and kill you right when you land.

When you reach the top level, there are even a few Mini Dragons waiting to trip you up. Be very careful around them, and be prepared to fight against a Giant Demon Skeleton. You'll have to decide how you want to use your fireball weapon. If you can use it quickly and switch off, you might have enough time to use it again against the next Giant Demon Skeleton that awaits you at the bottom of the long right shaft. If not, you may run out of fireball and be forced to use bombs to take one of them out. Once the coast is clear, jump up to the far left wall and climb up to the exit. 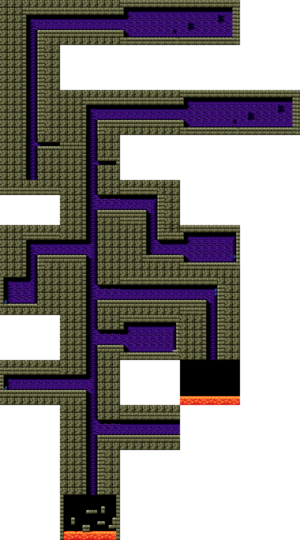 You begin the scene at the very bottom of an extremely long drop. You must leap up and begin wall bouncing almost to the very top. Along the way, there are many corridors with bats, Skeleton Necks, Spiders, and Half Catfish. Some corridors lead to rooms with Giant Skeleton Demons, or Giant Daruma Dolls, and some even dead-end or drop into a pit of lava.

You are recommended to ignore all of these corridors, and bounce as high as you can. When you see a lone small Skeleton in alcove, make note of the blocks on the opposite wall. Around the time you reach this section, some enemies will actually drop from above, making it difficult to keep your wall bouncing up. Some of the blocks opposite the skeleton can be blown up, allowing you to proceed to the left through the wall.

Once you bust through this wall, avoid falling down as there's a Spider in the narrow space at the bottom. You must make your way up, but falling enemies will make that extremely hard to pull off. Skeleton Necks will be flying around the corridor above, so time your approach carefully. When you make it to the top corridor, run to the right where you will see a column of bricks blocking your passage. Remove the lower ones, but don't remove them all; a bug in the game sometimes prevents the exit from appearing if all four bricks are destroyed.

When you reach the final room, a Giant Demon Skeleton will appear. Under the assumption that you don't have any fireballs left, you'll have to carefully toss bombs at the skeleton quickly and from a safe enough distance to avoid getting hurt. However, if you are not very far to the right when the skeleton is defeated, another one may reappear in it's place. Once you destroy one far enough over, they will stop appearing. Then run for the far right wall, and hit the brick near the ceiling with a bomb. That should reveal the exit. Climb up and escape.

This scene appears like a nighttime version of scene 25, complete with the bug that causes everything to leave trails behind it as they move. You will only face one enemy in this scene: the final boss of the game. The final boss looks like a golden statue holding a sword. This enemy behaves pretty much the same as the Giant Demon Skeletons or large armored enemies. The only thing that can harm you is the sword, but the statue can swing the sword quite wide, so it's difficult to avoid. You'll have to pelt the boss with bombs as rapidly as possible while staying out of the swords reach to defeat it. If you're successful, the game will end, followed by a short message and staff credits.