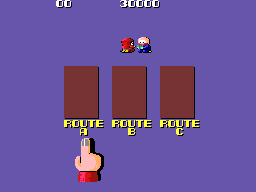 Ninja-Kun Ashura no Shou is a linear adventure game. You must proceed through 30 scenes in order to face off with the final boss in the 31st scene. Each scene has one of two objectives: you must either defeat every enemy present in the scene, or you must reach an exit located somewhere in the scene. For the most part, each player will play through the same scenes, with two exceptions:

Life limit
Throughout the game, you will earn extra lives when you first hit 30,000 points, and then for every 50,000 points thereafter. However, you can only hold a maximum of 6 extra lives at any given time. If you earn an extra life while you currently have 6, you will not receive the extra life. Once you drop below 6 extra lives again, you will resume collecting extra lives, up until you reach the maximum 6 extras again. 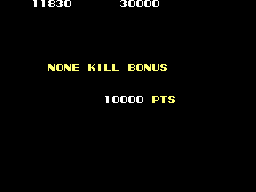 No kill bonus
If you manage to complete a stage whose objective is to escape, without defeating a single enemy in the process, you will receive a 10,000 point "no kill" bonus in addition to your remaining time bonus.

Defeated enemy strike bonus
After killing a basic enemy, they begin to fall head-first to the bottom of the screen. While they are falling, it is possible to continue hitting them with a weapon, particularly with fireballs. Whenever you hit an enemy that is falling, you will receive a 1000 point bonus. You can receive this bonus as long as the falling enemy remains visible. 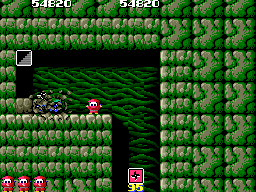 Throwing star power
There are certain blocks that you can destroy by hitting them with a weapon. When you use a throwing star against these blocks, the star damages the block and disappears. However, if you manage to throw the star at a height just above the blocks, the star will continue to fly forward and destroy all of the blocks without stopping. 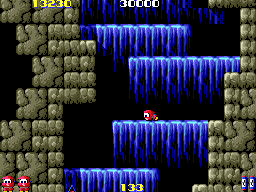 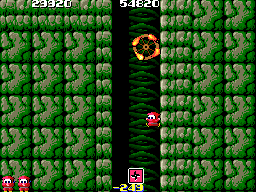 The arcade game contains a few glitches that you should be aware of. They may help or hinder your progress through the game. 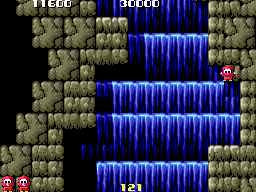 Jump through walls
It is possible to cause your ninja to jump into a wall and then continue to jump up through the walls until you reach an opening. To do this, stand on a platform so that you are directly below another platform next to a solid wall. Jump up so that you arrive halfway into the solid wall. Then press the jump button and you will quickly ascend through the wall. 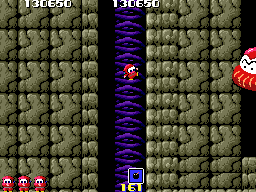 Giant Daruma Doll displacement
One of the larger enemies is a giant Daruma doll that hops around the ground and causes earthquakes when it lands. If you encounter one, and the move very far away from it, there is a chance that the game will allow the doll to move to a location that it could not otherwise reach, such as outside the map. For example, in Scene 10-A, a doll appears to the right of where you land. If you turn back around and jump up the shaft, when you return back down, you may find the doll outside of the shaft to the right, where it can no longer harm you. 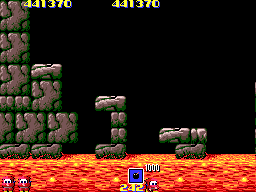 Walk through lava
In scenes where you are required to fall from a great height to a lava covered room below, it is possible to land safely in the lava and continue to walk through it if you begin rolling in mid-air when you hit the lava. If successful, you can walk through the lava unharmed, and you can even jump out of the lava, but you cannot jump back in to the lava or you will lose a life. 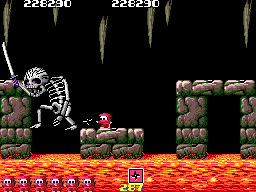 Giant Demon Skeleton gets stuck
If you perform the "Walk through lava" trick successfully in Scene 16, you can cause the Giant Demon Skeleton found in the lava portion of the scene to become stuck and vulnerable to attack. Walk to the right until you see the Skeleton. Then walk back to the left quite some time. Then return to the right, and you should find that the Skeleton has "hopped" to the lower platform to the right. Begin walking back to the left once again, and then return, and you should find the Skeleton stuck in the open space between the tall and short platform. Then you can jump up to the short platform behind the Skeleton and destroy it without fear of a counter attack. 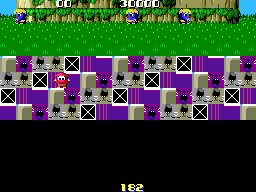 Random revival
Certain scenes that allow you to walk to the very edge of the screen, such as Scene 1-B. If you walk up to the edge of the screen and allow yourself to be killed, when you return, you will be in a pure black screen, unable to move from your starting position. You will have no choice but to be killed by a fire wheel. When you return, you will be below the original scene. Press the jump button to rise back up to the scene and resume normal play.