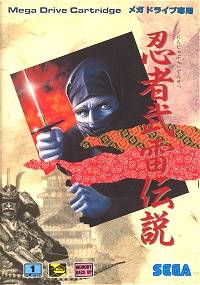 Ninja Burai Densetsu (The Last Ninja) is a strategy game developed and published by Sega for the Sega Mega Drive. It was released in Japan on December 6, 1991. The game makes you choose different classes, from samurais to ninjas, to defeat the enemies on the battlefield. There are also side-scrolling stages your soldiers have to go through between moves. The strategy is turn-based; first you make your move by moving your soldiers on an available space to fight the enemies, and then the enemies make their move and try to defeat your soldiers.

Ninja Burai Densetsu was released early in the Sega Genesis's life-span, and it was one of the most popular Sega Genesis strategy games in Japan. Its simplicity made it a pick-up-and-play title, largely based on turn-based strategy. It's similar to Shining Force, also on the Genesis. The game seems to take place during a war in Japan between you and the enemy army, with soldiers based on fictional Japanese classes of samurais and ninjas, and also ranging to archers, riflemen and healers.

One thing that sets Ninja Burai Densetsu from other Mega Drive strategy games is the side-scrolling stages. They can be taken at chances when your soldier lands on a special stage, the side-scrolling stage. This lets you go into houses to gain numerous benefits for your soldiers, namely upgrades. Go into any house you can and the person inside will help you. When the stage is over, you'll go back to the war. Character upgrades allow for a bigger chance of your success when your soldiers fight enemy soldiers.

The ninja is the main class of the game. They can walk on any type of terrain since they are versatile, and also can cast an abundance of magic. The ninja is the only class in the game that can use offensive magic as opposed to defensive magic. This is a large advantage, as it doesn't involve any of your soldiers getting attacked along with the enemy because of its projective form and long range. A large disadvantage of the ninja is their health. They start the game off as very weak and somewhat useless soldiers. However, if you station them right, attack safe, stay away from the deadly Samurai and keep upgrading, your ninja will most likely be the strongest soldier on your team. Upgrading is essential to the ninja. If you don't upgrade, your ninja is bound to die.

On the enemy's side, ninjas will always remain easy kills, no matter what. The Samurai is the one to look out for. Attack the ninjas with one of your upgraded ninjas. A rifleman is also effective against the ninja. The Samurai would also be a good option, as the ninja's moves would be useless against their armor.

The samurai is the strongest defense class of the game other than its much-improved counterpart, the Mounted Samurai. The samurai can take out any class other than the Mounted Samurai with ease. Riflemen and Spearmen are good targets for the samurai as well as the ninja, though you should probably get your samurai to concentrate on getting rid of the ninjas, and let your ninja(s) focus on getting rid of riflemen and spearmen. Another good strategy to use is using your samurai as an army shield. Because of the samurai's incredible defensive abilities, put them on the front-lines and let the enemy army have their go at defeating your samurai. If you get your samurai to keep defending, no damage will be done to them and the enemy army will be worn out enough for the rest of your army to finish them off.

When an enemy samurai is picking fights with weaker soldiers of yours, move the weaker soldiers away to try and defeat classes their own size. You'll need to have a samurai on your side to try and defeat an enemy samurai. If not, all of your soldiers will waste their health working together on attacking the samurai. It's always best to have a healer in these types of situations. Having a mounted samurai, however, would probably prove to be a large advantage to you in defeating an enemy samurai. Another solution would be to keep upgrading your Spearman. Though the enemy army's spearmen can be useless, if you work your spearman hard, he can prove to be a real samurai killer.

The spearman is the most all-around class of the game. It's best to work them up for higher levels. Pay for his training and keep upgrading. Though the spearman seems useless at first, he can take Samurai out that are on the same or lower level easily. With the right training and upgrades, he can get through any tough armor easily. So if there's a crowd of samurai, it's best to use the spearman to either take them out or just weaken them. Then, bring out your samurai to finish them off.

The spearmen are usually weak and useless on the enemy army. This makes them easy to take out with the Ninja. However, don't try taking them out with your spearmen. Since you and the enemy spearman would be the same class, you'll both take damage and get nothing good out of it, unless you're at a higher level, which is unlikely in the earlier levels.

The medic (or healer) should be a crucial part of your army. Use him to heal other soldiers in your army. Since the only thing he can do is use spells to heal, you should be careful if a member on the opposing army is going for an attack. This shouldn't be worried about if you have a powerful army, as the other soldiers would be focused on. If the other soldiers get hurt, the medic will be around to heal them, making the war a whole lot easier.

Though the archer doesn't have too much trouble weakening armored enemies like the samurai, he does have a problem with all other opponents, as they can deflect his arrows easily. This makes the archer the weakest class of the game. Though the archer attacks from a safe distance, he does little or no damage to the opponents due to the simplicity of deflecting the arrows. He uses a safe strategy, but that barely matters, as he is a useless soldier to add to the army.

The rifleman can move the lowest amount of spaces out of all classes in the game, but his highly-damaging rifle shots and bigger chance to have his shots actually hit the enemy makes him a more valuable class than the archer. When upgraded enough, he gives opposing soldiers the highest damage rate out of all other classes. Though it may not be the most encouraging thought to spend money upgrading the rifleman, it would make him the strongest soldier on your army.

The mounted samurai is the most powerful class in the game. Having the most moves and best damage done when maxing out his stats, he can become unstoppable if you choose to upgrade him. He can easily take down more of the powerful enemies, but can sometimes have trouble when meeting with another Mounted Samurai. Keep a medic nearby, as you wouldn't want to lose a soldier as useful as the mounted samurai. 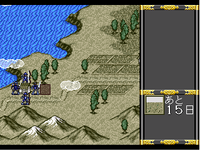 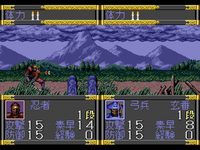 When your soldier gets into a fight with an enemy soldier, it leads to a fight. The candles represent how much life they have, and the stats on the bottom represent how strong they are and what they're using to fight.

When a soldier on your team is in need of health or is too weak to fend for themselves, spend your money wisely by going to side-scrolling stages. Choose whether you want your soldier to rest, which gives their HP back, or get them training, which is like an upgrade.