Ryu makes his way to his father's old associate, Dr. Walter Smith. Dr. Smith explains that when he and Ryu's father, Ken were on an expedition in the Amazon, they found a statue and a stone tablet. A demon once appeared and caused many deaths, but then Shinobi borrowed the power of the dragon to defeat the demon. But this did not kill the demon, it merely put it to sleep. So Shinobi locked the demon's spirit into two statues, one of light and one of darkness. Just as Walter was about to explain more, an enemy ninja swoops in and grabs the statue before escaping. Walter asks Ryu to retrieve it.

Walter lives alone in the wilderness, and you'll have to trek across a good expanse of it to get the statue back. Slash your way through the first group of enemies and watch out for a mountain cat attack from behind you. When you reach the first jump over the water, an eagle will appear. These eagles swoop overhead and double back to attack you from the opposite direction. Be prepared to stop and turn around when the eagle approaches you.

The second item over the dock segments contains an hourglass which will freeze the next eagle. Keep jumping up to take advantage of the time freeze, and watch out for another cat attack from behind when you jump down to the lower platform. The item high in the sky to the left of the dagger thrower is a Flame technique. It's useful to have, but to get it, you must run to the right, jump up, and double back along the high platforms to the left. Decide whether it's worth the extra trouble to you.

After you reach the end of the high platform, you'll have to jump down to a very small segment of dock down below. Be careful when making this jump. As you leap to the second segment, and eagle will appear. The item over this segment is a health-restoring potion, so collect it carefully. Another eagle will appear as you attempt to reach the end of the stage and advance to the next one.

From the wilderness to the cold mountains, you continue your pursuit. After you kill some enemies on the first ledge, there is a bazooka toting soldier on the second ledge. Take him out before he can fire at you, or jump over his bullet. There's another soldier behind him on the next ledge.

When you drop down to the next ledge, an eagle will appear. Take it out before you attempt to advance and attack the enemy guarding the next ledge. Collect the Windmill Star if you like, take out the dagger thrower, and then climb up the ladder to attack another dagger thrower. You should only drop down the gap here to the ledge below if you intend to collect the red spirit points tile, and the flame technique found along the bottom. If you don't want these, you can simply run across the top and continue through the stage.

If you do wish to collect these items, time your drop so that you land between the enemies. Then as you advance to the right, only jump up to the higher ledges, never to the lower ones. Simply run to the right, and you will land on them. Watch out for the eagle that flies by on your way, and the bazooka soldier. Once you collect the Flame technique, you have no choice but to double back and jump up to the ledge above to continue on. The eagle and bazooka soldier will reappear.

When you drop down to the lower ledge, let the soldier running behind you jump off the ledge and fall to his doom before jump over to the ladder and climbing up. After dropping down, time your jump over the gap so that you jump over the bazooka soldier's fire before attacking him. Along the next stretch, you'll have to watch out for more eagles and bazooka soldiers before you get close to the end.

When you run to the right side of the high ledge close to the very end of the stage, you will be attacked by a cat from behind. In order to save yourself a lot of hassle and danger, jump over the cat, and let it fall down to its doom on its own. Wait until the enemy below reaches the left side and starts walking back before jumping down to attack him. As you do, an eagle will also appear. If you are not extremely careful here, you can fall down into the gap and be forced to start over from the start of this stage. 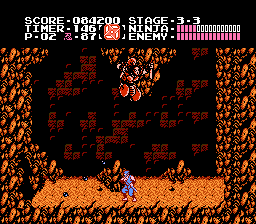 The boss of Act III is Basaquer. Basaquer attacks by leaping back and forth from one end of the room to the other. He never jumps anywhere else, so when you stand in the middle of the room, you can never be hit by his body. However, every couple of jumps, he shoots out a trio of darts that cross the room. These darts always appear in the same formation. With accurate timing, it is possible to duck down and slash the lower two darts out of the air while the third dart sails harmlessly overhead. You'll need to pay very close attention to when these darts appear in order to defend yourself from them by attacking the lower two. When the darts are not a threat, you should position yourself close enough to be able to strike Basaquer with your sword without being close enough to get hurt. Swing your sword whenever he is close by, and prepare to defend yourself whenever he isn't. You can complete this battle by pretty much remaining in one place, and turning around whenever necessary.

As soon as the battle's over, Ryu has a bad feeling and rushes back to Dr. Smith's place, only to find him gravely wounded. Dr. Smith explains that they got away with the Light statue, which was in his possession. He and Ken each kept one of the statues to prevent the demon, who's been asleep for 700 years, from waking up. He urges Ryu to become the Dragon Ninja and reclaim the statues before it's too late. Just then, three men appear, and ask Ryu at gunpoint to come with them...