It turns out that your abductors were actually from the CIA. You will be introduced to Foster. Ryu believes he had Smith killed, but Foster claims they had nothing to do with it. A 2000 year old temple was discovered in the Amazon by Dr. Smith, who sealed the ruins off. Afterwards a man named the Jaquio took over the ruins. It turns out the temple was built to imprison a demon, and the statues are the key to reviving him. He asks you to go to Brazil and track down the Jaquio in order to prevent him from obtaining incredible power. You are then transported to the South American rain forest and you parachute to the ground below.

The challenge continues to rise. The first enemy you encounter is a gun toting soldier. With no techniques to rely on, not even a throwing star, your best bet is to quickly jump over the gap before him, land on the edge of the platform, and slash him before he has a chance to fire at you. Beyond him, watch out for a cat that runs towards you, as well as an eagle which flies overhead and doubles back.

Take out the dagger thrower as you jump up to the platform he stands on. From here, you have to choose to go up or down. If you wish to collect a Windmill Star and an extra life, go down. Going up is easier, but it will only net you a Jump and Slash technique. Assuming you choose to take the lower route, simply fall down to the platform below, and then jump up to the one above. Wait for the soldier below to stop shooting before you fall down and remove him. Then walk to the left edge of the bottom platform, jump up and slash the spider, edging to the left as you do in order to collect the extra life before it falls in the swamp. Remember to push back to the right once you collect it so that you don't fall in the swamp either.

After a bat comes flying towards you, you'll see a bazooka soldier squatting on the platform. If you have the Windmill Star, use one to remove him. Otherwise, you'll have to jump over and get hit so that you land on the other side of him and can attack him. Above this soldier is a spider that contains the Fire Wheel technique. While this is a useful technique to have, remember that collecting it means you lose any other technique you are currently holding when it runs out. You can survive without it.

Run to the end of the high platform and simply drop off the side to land on the small platform near the bottom. A cat will chase you, but will likely double back. Meanwhile some bats will attack, but the first will fly over your head. Wall jump up between the platforms, and continue on to the right. A gunner will be waiting for you, who is very hard to avoid. As you reach the ladder on the far right, jump over the bat and climb up. 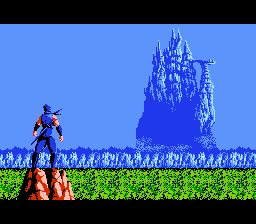 The view from the top

You will have a free screen to climb up before reaching the top. When you reach the top, you will be attacked by a rather persistent eagle. Do not immediately jump off the ladder and on to the platform, as that makes you vulnerable to getting knocked off the screen. Cling to the ladder as the eagle flies back to the left, and then get off to attack it before it returns.

As you make your way to the right, you will be attacked by a trio of enemies; one sword swinger, one gunner, and an eagle. Take out the sword swinger first, then target the eagle, and then finally take out the gunner who is higher up when the coast is clear. As you run to the far right, you will be attacked simultaneously by two cats running at you from either direction. You can jump straight up where they cross to avoid both of them, or take out the left one and jump over the one from the right. Run to the right to reach the end of the stage, where you get a good long glimpse of the demon temple.

As you start out in this stage, you will be introduced to two new enemies. The first, a knight in armor with a sword, is a basic enemy that you shouldn't fear too much. However, the second is a highly agile ninja that drops down from the top of the screen to strike you. Do your best to anticipate where they will fall, or bounce, and be prepared to strike them when they land. Continue to the right, jumping over the occasional mine cart and striking the lamps above them for items. Watch out for bats.

When you reach the first gap, don't immediately jump over. Pause for a moment to let a bat approach you, and then jump over the gap and the bat at the same time. You will meet another new enemy here. A demon tossing blades at you patrols the platform above you. If you jump up and get hit by him, you will bounce up to the higher platform and you'll miss the opportunity to collect the Flame technique at the end of the bottom. If you do collect it, you'll have to return to the left and jump on the mine cart to reach the higher platform and proceed.

Ninjas and bats continue to appear until you reach the next section, where you'll see two more blade throwers. At the right end of the lower platform is a time freezing hourglass. It is recommended that you pick it up before jumping up to the bridge and running as far to the right as you can, in an effort to avoid more confrontation with enemies.

Once you start running across the bridge, it is likely that two, or even three eagles will attack you. If you get them to fly far enough to one side of the screen, you can sometimes double back and force them to disappear off the opposite side of the screen. As you make your way across, many ninjas and eagles will appear to slow your progress. Stop and deal with them so that you don't let so many appear that they become impossible to deal with.

Once you reach the end of the bridge and drop down, be sure to hit the lamp on the left for a much-needed potion that will restore some of your lost health. Jump over the gap, and collect the Jump and Slash technique from the next lamp if you want it. The lamp high above contains an extra life, and you'll have to jump on the higher platform and leap to the left to collect it. Then finish out the stage by running to the right and climbing up the ladder.

Fight your way through the next set of enemies, including the last enemy who lobs clubs at you. A lamp appears below the platform which contains a Windmill Star, so only fall down if you wish to collect it, but watch out for the dog which appears along the ground. Then make your way across the last few platforms to reach the ladder on the right.

Once again, climb up and then leap over the column to proceed. You'll have to make a long leap to the broken column ahead of you. Watch out for the gunner guarding the next broken column. On the ground, you'll meet a new enemy who leaps in air to perform a whirlwind kick as they approach you. Eliminate two of them, and prepare for the next challenge.

You'll have to wall jump up between the column and the wall of the platforms. But at the top is a statue that shoots blasts of fire at regular intervals. It's difficult to time your approach to the statue so that you avoid getting hit. One technique that expert players rely on is to climb up the wall of the lower platform by jumping off the wall and very quickly returning to it so that you actually climb up. If you are successful, you can reach the top of the lower platform where you can safely launch an attack on the statues that guard the higher platform. The candle to the right contains a health-restoring potion.

As you jump over the platforms above the gap, don't hestitate; a gunner is waiting for you, and you should jump over and attack him before he has a chance to shoot at you. One more statue awaits you on the last platform above the ground. On the ground, guarding the ladder up, is a man who tosses axes. Remove him and climb up to the last section.

Hop up the series of platforms, and up and over the column that you just climbed up. You'll encounter more whirlwind kick enemies. The very high candle that you see from the ground contains a Windmill Star. It is accessible from the ground if you use the Flame technique. Otherwise, you'll have to wall jump to the top of the left column to hit it. Use the Windmill star to remove the last remaining enemies in your way before reach the door to the boss on the right. 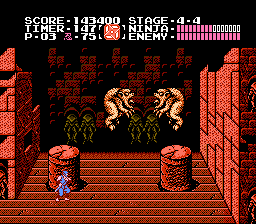 The boss of this stage is known as Kelbeross. It appears to consist of two dog-like demons who hop around the room. Both demons can hurt you, but in fact you can only harm one of them. The one true demon is easy to determine from the fake demon. The true demon leaps much farther than the fake one. Identify the demon who jumps better (it starts on the left side) and track him. The demons can hurt you if they jump on you, but they also spit gas that floats across the room. They never spit this gas along the floor, so you are safe from the gas if you never jump. The demons also jump on to their pedestals whenever they get close to them. So you're actually relatively safe if you stand directly in front of either pedestal, reaching out to slash the better jumper whenever it gets close enough to you to hit. Stay near the safety of the pedestals and be patient with your attacks, and you will eliminate Kelbeross easily.

Upon defeating Kelbeross, you will come face to face with the Jaquio. He will ask you to hand over your statue, but you refuse. Then he reveals that he has the female CIA agent who shot you in the beginning of the game held hostage at knife point. You are honor bound to give up the statue, and in return, the Jaquio triggers a trap door, sending you down into a dungeon. He orders the girl be taken away for a sacrifice, and revels in the thought that the demon will awaken after 700 years and he will rule the world.