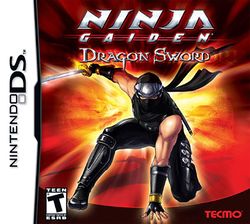 Ninja Gaiden Dragon Sword is a Nintendo DS featuring the Dragon Ninja, Ryu Hayabusa as the main protagonist. Dragon Sword is the first portable video game title in the series to be developed by Team Ninja. The camera is set in an isometric viewpoint and follows Ryu. The ideal orientation of the Nintendo DS while playing the game is holding it sideways, like in Hotel Dusk: Room 215 and Brain Age. The left screen shows the area map while the right screen shows the main gameplay, and reverse when set for left-handed play.

Dragon Sword is set six months after the events of Ninja Gaiden and introduces a new female character named Momiji.