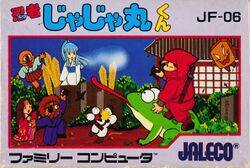 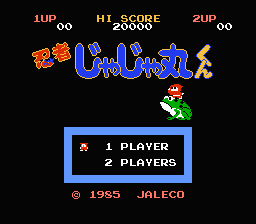 After Jaleco ported Ninjakun to the Famicom and MSX home computers for UPL, they went ahead and developed their own sequel to the game, apart from the official sequel that UPL developed, Ninja-Kid II. It was called Ninja Jajamaru Kun which roughly translates into "stubborn round little ninja". The sequel contains many of the elements found in the original game, except that it scrolls horizontally instead of vertically. Like the original game, after the first two rounds, each round contains seven normal enemies and one more difficult boss enemy. And like the original game, you must jump and fall to different levels, taking the enemies out with throwing stars.

This game was the start of the "Jajamaru" series for Jaleco. After it was released for the Famicom, it was converted for play in the arcade using Nintendo's Vs. arcade system, under the title Vs. Ninja Jajamaru Kun, which contains different character sprites for two of the enemies for reasons unknown. It was also developed for the MSX home computer. In 2004, the game was included as one of five Famicom games in Jajamaru Jr Denshouki Jaleco Memorial for the Game Boy Advance. It was also released for Windows as part of an anniversary series of retro games. The Windows release uses the two altered sprites found in the arcade version as opposed to the original sprites from the Famicom version. In 2007, the game was released for download on the Wii Virtual Console (only in Japan).

When Princess Sakura is kidnapped by the "Catfish Pirate", she requests the help of Ninjakun, who defeated the evil army at Demon Castle. However, that ninja is away for training, so the request falls to his younger brother. Ninja-Jajamaru-Kun accepts the challenge and heads out to each of the Catfish Pirate's many hideouts in an attempt to rescue the princess from his clutches. But the pirate has an army of demons ready to deal with him.