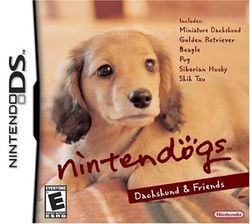 Nintendogs is a Nintendo DS game based around looking after a puppy (or puppies) and entering them into competitions, earning money to buy them things, etc. The dogs will not 'die', but if they are not fed for a long period of time they will be disobedient until they are. Nintendogs was originally released in three versions (Dachshund & Friends, Chihuahua & Friends and Lab & Friends). These were followed by two more versions, Dalmatian & Friends and Best Friends.

Like the multi-version releases in the Pokémon series, the different versions of Nintendogs are mostly identical. All include the same breeds, although each only provides access to a limited selection at the beginning of the game; other breeds can be unlocked by collecting owner points. Version-exclusive items can be unlocked by using Bark Mode with a different version.