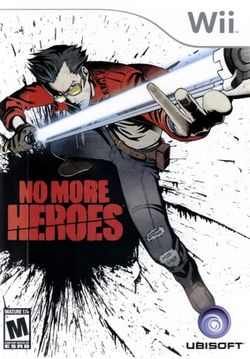 No More Heroes (ノーモア★ヒーローズ, Nō Moa Hīrōzu?) is an action video game for the Wii. It was directed by Goichi Suda (known in Japan by the nickname Suda51), developed by Grasshopper Manufacture and published by Marvelous Interactive/Spike, Ubisoft and Rising Star Games. The game was previously titled Heroes, and is not a sequel to Suda51's earlier game, killer7, but an entirely original game running on a new engine. Though the two games have stylistic similarities, Suda51 has said that while killer7 focused on political issues, No More Heroes focuses on social ones. A sequel, No More Heroes 2: Desperate Struggle, was released in January 2010.

An expanded version for the Xbox 360 and PlayStation 3, titled No More Heroes: Heroes' Paradise (NO MORE HEROES 英雄たちの楽園, Nō Moa Hīrōzu: Eiyūtachi no Rakuen?), was released in 2010. Only the PlayStation 3 version was released outside Japan.

The story follows Travis Touchdown, who is a stereotypical otaku – his motel room decorated with professional wrestling and anime collectibles – living in near poverty in the No More Heroes motel of the fictional town of Santa Destroy, California. After winning a beam katana in an internet auction, he runs out of money to buy video games and wrestling videos. After meeting with Sylvia Christel, he accepts a job to kill Helter Skelter, also known as "the Drifter," which earns him rank 11 by the United Assassins Association, a governing body of assassins. Realizing that he has the opportunity to make it to the top, he sets out to secure himself the coveted position of number one hitman in the UAA.