Ogre Battle: The March of the Black Queen/Castle of Warren 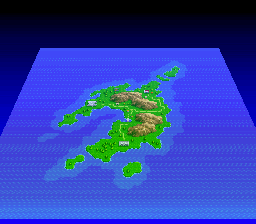 Warren (city of Volzak): Welcome to my castle. I have been waiting for you. You must battle with the evil Zenobian Empire. The stars have dealt you this fate. I have informed everyone of this, but unfortunately they do not believe me... so you must allow me to test you to see if you are truly fit to be our leader. First, liberate all of the towns and temples on this island. All will begin with that...

Roshfallian temple: Everything is progressing in real time. Morning to night, night to morning. Time is always flowing. You must therefore be able to make quick decisions... or lose battles. When you need time to consider your strategy, press the start button to issue the pause command. Even while paused you can issue commands, so you can avoid hasty decisions. Especially before battling with an enemy unit, it is always wise to pause and check your unit's condition. May the gods be with you, Destin.

Trade city of Daskania: By liberating towns and temples you can gather information and get Tarot cards. You will also receive a tribute every day from each town you liberate. You cannot run an army without money, so be sure to liberate some towns! May the gods go with you, Destin.

City of Volzak (2): Pressing the X button displays the main command icons. The main command icons let you use items, check your Tarot cards, and perform other actions. If you do not understand a command, press the select button. An explanation of the command will be shown. You can also see the effects of items and Tarot cards by pressing the select button.

Warren (2): Try returning to the places you have freed. There are places where you will hear different information at different times!

Roshfallian temple (2): When you have taken damage in battles try going to a town or temple. By resting in these places your wounds will slowly heal. When a character has been killed, go to a temple. They will help you revive him there.

City of Daskania (2): You can receive one Tarot card each time you liberate a town or a temple. The Tarot cards you receive can only be used in battle. There are cards to attack your enemies, heal your people, and aid you in battle. There are a total of twenty-two different cards. You can only keep fourteen ato once, and they can only be used once each. The higher your Opinion Leader's statistics, the more effective the cards are.

Warren (3): The walled city of Zeltenia is hidden on a small island to the north east. The knight Sir Lans should be there. Please go meet him.

Lans (hidden city of Zeltenia): My name is Lans... I am a knight of the Royal Zenobian Army. You must be the new leader Warren was talking about. I must say I like the look in your eyes... We have lived until this day only to see the wasteful death of king Gran avenged. I believe that at your side we just may be able to do that. I hereby pledge my allegiance to you! We will fight with you until the Zenobian Empire is crushed and true peace has returned to this land!

Hidden city of Zeltenia: To deploy a unit, press the X button and use the "deploy unit" command.

Warren (4): It seems that you have prepared for the battle ahead... You must now do battle with me! If you manage to defeat me, we will all follow you... Let's do it!

City of Volzak (2): Pressing the A button during battles will allow you to give commands.

Warren (after the battle): You have done well, and all now know your power. Our fate now lies in your hands, Destin. Now we shall fight together until the Zenobian Empire is brought to its knees!

Re-visiting the castle of Warren[edit]

City of Daskania: If you press the R button, you can see a reduced map.

Hidden city of Zeltenia: Go look to the southwest of Warren's castle. You may find buried treasure there!

Roshian temple: When you are in an area you have already cleared, you can return to the main map screen anytime you wish. Just press the X button to open the main commands. You will see an icon called "return to map".

City of Volzak: You can make three commands at the main map screen by pressing the X button. Use the "edit units" command to build or change the units in your army. A true leader must be able to use those under his command wisely. Good luck.