Ogre Battle: The March of the Black Queen/Slums of Zenobia

Remember that, because of perspective effect, a triangular portion of each map is superimposed to the other one. 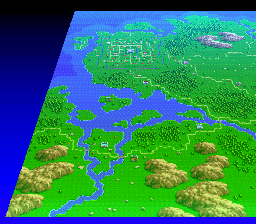 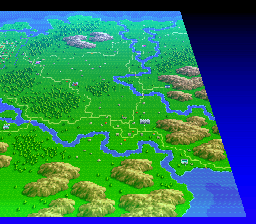 Roshian temple (NE): The gates around castle Zenobia have been closed to stop the Rebels' attack. Only a flying unit will be able to get over those walls! What to do, what to do...

City of Post Ina: In the castle to the north west is general Kaus Debonair, one of the four Devas. If the Empire has sent someone like him out here, they must really want to stop the rebels!

City of Pruzen: Zenobia used to be the most beautiful city in the world, but now it is just a giant slum. There are a lot of people there who have lost their families and their homes. I guess they thought that by going to the city they could have a better life, but...

Roshian temple (SW): There should be an old temple on the island to the north of here.

Trade city of Fillia: General Debonair is very set in his ways. The other day a merchant tried to bribe him for exclusive rights to a new trade route. Not only did the merchant not get the rights, but he was arrested! I will bet the reason Debonair was sent all the way out here is because he is so straight.

City of Elrangen: After king Gran was assassinated, averyone in the royal family was executed. They even say that the executioner was the general of the Royal Zenobian Knights! Can you believe it? The general? I think his name was Ashe...

Lyon (city of Anberg): So you are the rebels, huh? Glad you came by. My name is Lyon the Beast! Best beast tamer in the world! Have you come to hire me?

Hidden city of Palma Nova: Debonair is a member of the Empire, but he is actually a fine man. Very polite, very honourable. If everyone in the Empire was like him, then I am sure they would have the support of the people.

Hidden Roshian temple: The gates around Castle Zenobia have been closed to stop the rebels' attack, but I can help! Please take these termites! If you use these, even the strongest wall will be brought to the ground!

Hidden city of Kal Robst: Have you heard of the barbarian Ashe? He used to be the head of the royal knights, but he was arrested for executing the royal family. But it was not really him! The executioner was the black knight Gares, the prince of the Highlands! The mage Rashidi used his magic to make Gares look like Ashe. Ashe is completely innocent, but he never defended himself. Why do you think he did that? Because he blames himself for not being able to protect Gran's family, that is why.

Ashe (walled city of By'Roit): My name is Ashe, an old man who was ready to die. I have been imprisoned in this castle for twenty years now. I never thought I would see the light of day again. Thank you. So you are the rebels I have heard about. I am sorry you had to find me at my grave. How about it? Would you be willing to let me join you?

Walled city of Zenobia: ASHE: Hello, Debonair. It has been a long time. The Highlanders are supposed to be a race of proud warriors, but look at you! You have all become just a bunch of assassins! Where is your pride as a warrior? And why do you think a great general like yourself has been sent to a place like this? Endora is just trying to keep you out of her hair! Think about it! DEBONAIR: Shut up! I was sent here to stop you! Sent here to stop the fools who are trying to disturb the peace! ASHE: Disturb the peace? Look at this place! What was once the greatest city in the world is now nothing but a slum! Is this the perfect world you have dreamed of? Is this what Endora wants? DEBONAIR: Stop talking about Her Highness that way! ASHE: Very well. We will just have to show you another way!

Debonair (after battle): I cannot believe I have lost. Empress Endora has changed... She is not like she once was... I am willing to die for the sake of my Empress, but I will not die for an impostor! It seems there was something I should have done before fighting with the rebels. I am forced by honour to admit defeat for now. We will meet again, gentlemen.

Re-visiting the slums of Zenobia[edit]

City of Pruzen: Force is required for anything you want to get done. Love, justice... Hah! Words for children... The world can only exist through force. Do you think not?

Roshian temple (SW): We intend to work together to restore Zenobia to its former glory!

City of Fillia: The Empire is gone, but who will help the people who live in the slums? Have you thought of that? Of course not! After all, you are just a bunch of warmongers...

Roshian temple (NE): All people made by the gods are equals. The EMpire has forgotten that and cannot be forgiven for it. You must destroy the evil ones in the name of the gods!

City of By'Roit: It seems that there are even people within the Empire who are not happy with Endora. Most of them tend to drift to the outer fringes of the Empire. I wonder if Debonair could be one of them?

City of Elrangen: We intend to work together to restore Zenobia to its former glory!

Lyon (city of Anberg): My name is Lyon the Beast! Best beast tamer in the world! Have you come to hire me?

Hidden Roshian temple: We intend to work together to restore Zenobia to its former glory!

Banya (city of Kal Robst): I was hired as a nurse in the house of Zenobia. On the day that the family was massacred, I was able to smuggle one of the children out of town. The child was king Gran's eldest son, prince Tristan. Please find prince Tristan for me! Only he can lead the continent after the Empire has been destroyed. Or were you planning on ruling yourself?

City of Zenobia: I heard that empress Endora's first prince, the black knight Gares, is on the island of Avalon. Avalon is just a neutral territory of temples and monks. I am afraid that he has come to take control of the Roshian temples.