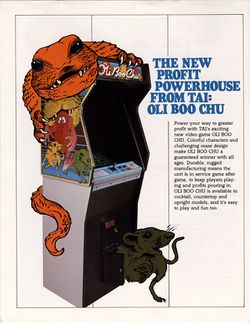 Oli-Boo-Chu is an arcade game which was released by both Irem and GDI in 1981; it runs on its own dedicated hardware (two Zilog Z80s, running at 4 MHz, with a General Instrument AY-3-8910 running at 2 MHz for sound). The player must use a 4-way joystick, to take up control of "Oli", a spherical pink creature, whose objective is to run around a maze and catch small rats named "Chu"s - the pink ones are worth 100 points and the green ones are worth 200 points but the yellow ones, nicknamed "Crazy Chu"s, are worth 400. The yellow ones also have the power to bite "Oli" from behind (and temporarily paralyze him); it is also possible to earn extra bonus points by luring one of the "Chu"s into one of the two "Race Traps", at the top and bottom of the maze. Every time he runs around it in a circle, you will receive 50 points (indicated by the eight small walls, at the top- and bottom-centre of the maze) - and the aggressors of the game are four large lizards named "Boo"s (which will kill "Oli" if they touch him). The "Boo"s will also occasionally leave yellow "Mystery Drops" behind, and these can be collected by "Oli" for 200-800 bonus points; however, if one of the "Chu"s should get to it before "Oli" does, he will eat it up. Once "Oli" catches all fifteen "Chu"s on the current round, he'll proceed to the next - and the two screenshots seen below are inaccurate due to the game's preliminary colour emulation in MAME.