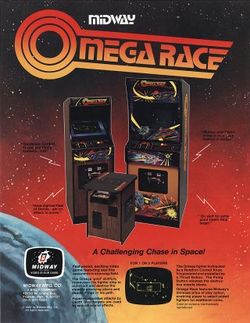 Omega Race is an arcade video game released in 1981 by Midway. It is, in fact, the only vector game created by Midway. According to Arcade Engineering co-founder (and former Allied Leisure designer) Jack Pearson, the idea for Omega Race came when some designers obtained a copy of Atari's Asteroids and created a new game by putting masking tape on the screen to create a track and they ignored the asteroids and were trying to fly around the track.

Omega Race differed significantly from Asteroids in a few respects. First, there was no 'wrap-around' (where you exit on one edge and return to the opposite edge). The player's fighter would stop if it collided with the walls. Second, all the information such as high score and ships left were in a box in the middle of the playing field. Last, you could be expected to encounter multiple attackers in each wave. Although Omega Race wasn't a big seller, it still created a following. Unfortunately, this game came out when games such as Pac-Man were at their peak.

Omega Race was not picked up for widespread home conversion, but it did make it to a few key systems, such as the Atari 2600 and ColecoVision. Commodore purchased the rights to bring the game home to two of their popular home computers. Interestingly, the Atari 2600 version is one of the few non-Atari games to ever come with a special controller designed to work specifically with this one game, but critics of this decision argue that the attachment was an unnecessary requirement.

In the year 2003, the Omega System developed a method of training its warriors to protect their star colonies against Android forces over the city of Komar. Omega fighters raced to engage and destroy these aliens and the mines they planted. The Omega method is so successful, it command fear and respect from all throughout the galaxies. This method is code named OMEGA RACE. 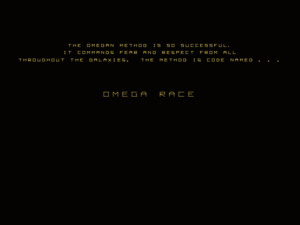