The main protagonist. He was raised by Sandayu with his sister Oboro. Onimaru has inherited the Oni Gauntlet and is on a journey to defeat the genma that are led by Oda Nobunaga.

Onimaru's sister. She joins the party after the beginning tutorial has been completed.

Oboro has a cheerful personality, making funny remarks at most things said to Onimaru during his quest. Being Onimaru's sister means that she is also a descendent from the Oni Clan, and being trained, will turn one of the best healers at the game, with the Heal-all ability.

Oboro's downside is her low HP, making her fragile to face tough genmas or bosses.

Bomaru is the first spear-wielding warrior to join Onimaru's party. He has short hair and wears a blue hairband.

He is a useful fighter, and learns healing at level 15. His most powerful skill is the Triple Stab, which can stab up to 8 enemies in a row.

The leader of the "Saiga Shu" gun troop in Kii prefecture. Bold, bright and cool-headed, he is good at handling both a gun and sword.

A Female Genma Descendant, She helps Onimaru and Co. while fighting the Genma.

A master spear fighter in the Houzouin style, Ekei a monk who loves money, liquor and the company of beautiful women. Before entering monkhood, he was a warlord who lost his wife and daughter were burned alive when soldiers ignited the building they were in, leaving Ekei in despair with one wish: To put an end to war by becoming daimyo by any means. He also has a soft spot towards little children.

Tsubame is a kunoichi, female ninja from the Iga, and the first of them to join Onimaru's party. She's very sincere and tends to say more than expected from a trained ninja.

Being a ninja, Tsubame can move more spaces than most characters, but also has a low HP compared to others. She can strike enemies with thunder from far distance.

Kabuki is, as the name implies, a kabuki-actor. He joins Onimura's party after receiving help to defeat some genmas, and becomes a loyal companion. He likes beautiful women, money and to perform.

He has good HP, and his Strongman mode ability is very useful during battles.

Saizo's a ninja from Iga, but deserted during his training and became sought by the other Iga residents, with a reward for his head.

Later, he sees the courage of Katsuhisa and Shikanosuke and feels ashamed of his attitude. He joins Onimaru's party to help other people and regain his honor.

He also has the ability to steal from foes, but like any other ninja, doesn't have a high HP or high defense stats.

A Fuma Ninja who works for the Hojo clan. He confounds his opponent with his agile movement and countless Ninjutsu. His childhood has been stained by the experience of being abandoned by his mother; which has caused him to distrust women. However, it is wiped by Oyu's caring and kindness. He appears to be in his late teens to early twenties. 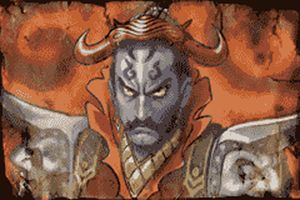 Oda Nobunaga (織田 信長, Oda Nobunaga?) Is an ambitious warlord resurrected by the Genma, determined to rule Japan with an iron fist. Becoming the new Genma Lord after Fortinbras' death, Nobunaga orders his troops to all of Japan. 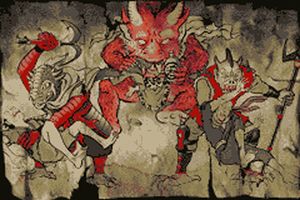