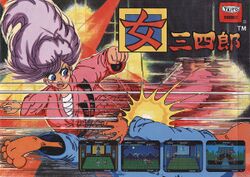 Onna Sanshirou - Typhoon Gal (女三四郎 – 台風ギャル, Onna Sanshirō - Taifū Gyaru) is a beat 'em up arcade game that was released by Taito Corporation in 1985 only in Japan; it runs on the company's The FairyLand Story hardware (two Zilog Z80s running at 5.3665 and 4 MHz) and was also included in that Japan-exclusive compilation title Taito Memories II Gekan for the Sony PlayStation 2 in 2007. Fourteen years after that on September 30, 2021, it got rereleased as part of Hamster Corporation's Arcade Archives series of arcade game recreations for the Nintendo Switch and Sony PlayStation 4.

The player must take control for a pink-outfitted female warrior (this woman is the eponymous "Onna Sanshirō", which means "Sanshirō Woman" in Japanese), as she takes on various white- and black-outfitted male opponents to defend the honour of her dojo; there are a total of eight unique rounds in the game, and once the last one has been cleared, the cycle will start over again at a higher level of difficulty (and continue in this manner until the player either runs out of lives or finishes 256 rounds).