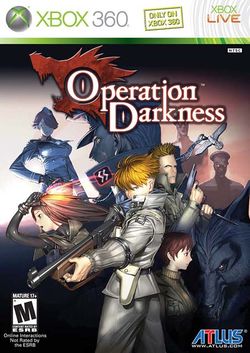 Operation Darkness is a strategy RPG (a.k.a. tactical RPG) for the Xbox 360 developed and published by Japanese studio Success on October 11, 2007 in Japan. A North American version was released on June 24, 2008 by Atlus. The game is a fantasy conception of World War II, featuring weaponry and events from that time period, but with fantasy elements such as dragons mixed in.

Operation Darkness follows a squad of British Special Air Service (SAS) soldiers fighting the Nazis across the European Theater. The story covers much of the real history of the European war, including the battles for North Africa and the liberation of mainland Europe. French resistance fighters, American soldiers, and others appear as NPCs.

The game diverges significantly from real history in that zombies of deceased Nazi soldiers appear as adversaries, and two of the player characters can transform into werewolves. Other fantasy elements include the appearance of supernatural foes such as vampires, as well as allowing the use of magic spells.