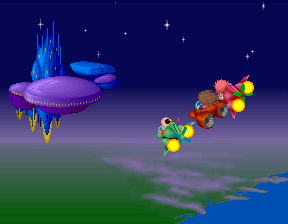 Namco's Japan-only 1988 horizontal scrolling shooter arcade game, Ordyne is divided into seven rounds; a player can play alone as the genius scientist Yūichirō Tomari or a second player can join in as his Chinese assistant Sunday Chin in an attempt to rescue Tomari's fiancee, Kana Aihara from the evil Dr. Kubota and his army of robotic minions. The enemies follow preset patterns (so as not to make the game confusing for beginners) and killing a group of smaller ones or one larger one will cause them to leave Crystals behind that can be exchanged for special weapons, extra lives, or even more crystals at Miyuki Chan's Kūchū IN and by firing marbles at the extendable rotating target of Dream Co., Ltd. The Vulcan shot is similar to the normal shot, but is fired from Yūichirō's (or Sunday's) ship at a faster rate, the 3-way shot is also similar to that normal shot, but is fired from Yūichirō's (or Sunday's) ship in three directions, the Wide shot is, as its name suggests, wider and also five times more powerful than that normal shot, the After shot is ten times more powerful than the normal shot and will be fired continously from both the front and back of Yūichirō's (or Sunday's) ship, and the Stock bomber shot will see Namco's signature character Pac-Man creating a shield around Yūichirō's (or Sunday's) ship, sucking in the projectile-firing enemies' shots (growing bigger and changing the colour of the shield as he does so), spitting them back out at them and being held in place by a green claw; the Fire bombs will create a huge explosion upon impact, the Homing missiles will automatically home in on any enemies currently on the screen, and the Subroc bombs (which are only available to Sunday Chin during the third and fourth rounds of the game) will fly up into the air and create a small explosion upon impact.