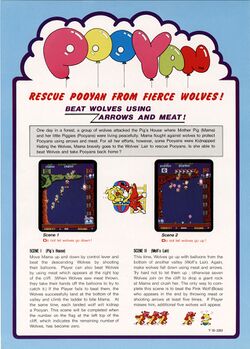 Pooyan is remarkable simply for its creativity. It could almost be loosely categorized as a shooter. In Pooyan, a clan of wolves have stolen two out of three of Mama Pig's little piglets. Not satisfied with just the two, they're out to finish the job. Mama has to defend her cliff side home from the wolves' assault. Armed with a bow and arrow, and riding an elevator manned by two pigs at the top of the cliff, Mama must pop the balloons that the wolves use to drop to the ground, or rise to the top.

Pooyan made a small, but noticeable splash in arcades around the world, enough to attract software publisher Datasoft to license the title from Konami, for release on several 8-bit home computers in the early 80s. Pooyan is one of three titles that Konami developed for the Atari 2600, long before they became a major software publishing house. Hudson also released the game for the Famicom, and the MSX. Much later in 2006, developer Hamster released an arcade accurate conversion for the PlayStation 2 as part of their Oretachi Game Center series.

One day in a forest, a group of wolves attacked the Pig's House where Mama Pig and her little Pooyan piggies were living peacefully. Mama fought against the wolves to protect her Pooyans using arrows and meat. For all her efforts, however, some Pooyans were kidnapped. The wolves come back to finish the job, and this time, Mama is prepared to take the wolves down and rescue her missing Pooyans.