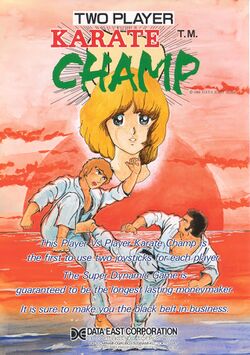 Karate Champ, known in Japan as Karate Dou (空手道, "The Way of the Empty Hand"?) is a 1984 arcade game developed by Technos Japan for Data East. The title Karate Champ may also refer to Karate Champ — Player vs Player (対戦空手道 美少女青春編, Taisen Karate Dou: Bishoujo Seishun Hen?, "The Competitive Way of the Empty Hand: Pretty Maiden Edition"), a sequel that was released for the arcades shortly after the original during the same year. Like its predecessor, it was published by Data East, but it is unclear if it was developed by Technos or by Data East. The game featured some early speech synthesis, in which the judge would call out such phrases as "Begin!" or "Half Point!"

The player assumes the role of a karate competitor and fights against another player or the computer. Players execute moves by manipulating two joysticks. Gameplay consists of a two dimensional fight between Karate characters wearing white and red gi, followed by various bonus rounds for the successful player. This pattern repeats itself in the next, more challenging round set against a new background. Unlike most later fighter-type games, there are no health bar or hit points. A hit successfully landed ends the round and earns the player or his opponent either one point or half point. The first to score two points is the winner.

The sequel is very similar to the original in the sense that they use the same hardware, have the same sprites and title screen, and the play mechanics are essentially the same although the computer AI is greatly improved along with control and hit detection. Whereas the original game started with the first level taking place at a dojo and all the following levels taking place at a tournament stadium, Player vs Player has the characters fighting it out over girls at locations around the world.

Karate Champ was ported to the Apple II and the Commodore 64 by Berkeley Softworks. Data East began publishing the home versions in the US on October 12th 1985. The NES version was released in North America on December 1986. This version was inspired by the Player VS. Player edition of the arcade game. The port was later released in Japan for the Famicom Disk System on July 22, 1988. Data East published this version of the game, both in North America and Japan. An emulation of the arcade version was released by Hamster for the PlayStation 2 as part of their Ore-tachi Gesen Zoku lineup, and again later for the Wii Virtual Console. On May 7, 2010 it was announced for release on the iPhone by developer Revolutionary Concepts. 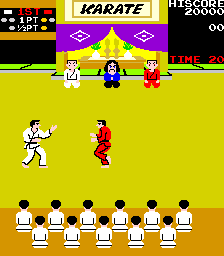 Points are awarded by connecting an attack with the opponent and knocking them down. A score is given for each attack, anywhere between 100 and 1000 points. If an attack scores 500 or below, the winner earns a half point. If an attack scores 600 or above, the winner earns a full point. The score of an attack is determined by how well the attack is executed, and how cleanly the opponent is hit. Not all attacks are capable of scoring higher than 500 points.

There is also a timer counting down throughout the match. It starts at 30, and counts down once roughly every second. The clock pauses when one fighter is knocked down, and resumes when the judge says, "begin." If the clock reaches 0 before either opponent has reach two full points, the judge chooses the winner. If one player has more points than the other, that player wins. If both players are tied, the match is awarded to the player whose combined attacks generated a higher score.

For the arcade version, and any conversion based upon it, the fighter's moves are entered by pressing particular combinations of directions on one or both joysticks. Refer to the table below to determine which moves will occur based upon the combination of directions.

The NES and Famicom Disk System conversion of the game uses a different control scheme. Aside from this change, all of the rules described above apply.