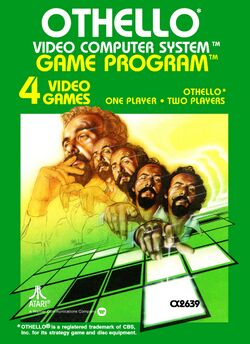 The classic board game of Othello (also known as Reversi) was first made playable on a console by Atari for their Atari 2600 (or Atari VCS) home system. Although only capable of rather primitive graphics by today's extraordinary standards, the game of Othello seemed right at home on the early system. The game featured four variations (which was actually somewhat small for an Atari 2600 game), which included three skill levels for single players, and a two player mode for head to head competition. Although Atari was the first company to officially publish Othello on a console, many future console releases would come from the Japanese owner of the rights to Othello, Tsukuda Original. See Othello (Tsukuda Original) for more information.

The board is made up of a grid containing 64 squares. Each player is designated by a color (white or black) and takes turns trying to capture as many squares as possible. When you capture a square, it becomes your square and changes to your color. Your corresponding score is displayed at the top of the screen. To capture a square, you must outflank your opponent. To do this, you must position your squares on the grid so that one or more of your opponent's squares is in a row which is bordered on each end by one of your squares. You may also outflank your opponent in more than one direction(horizontal, vertical, or diagonal) at one time.

If you have no available moves to outflank and capture at least one square, the cursor changes to your opponent's color after one second and you forfeit your turn. If neither player can make a move the game is over. This can occur when one player has no pieces left on the board. It is also possible to end a game when there are blank squares on the board and both players have pieces left but there are no legal moves.

For more information on how to play Othello, and the strategies behind it, please see the Othello guide on Wikibooks.

There are four Othello games in this Game Program. Each game number signifies a particular skill level (except for Game 4, which is for two players). 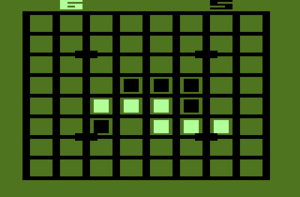 The following strategy is included to help the beginning player. If you are an advanced player, you may choose to use more complicated strategy, or strategy to help you develop yourself.