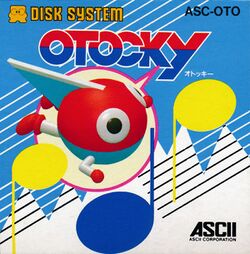 Otocky is a game released in 1987 for the Family Computer Disk System. Developed by SEDIC and published by ASCII Corporation, this was the first game conceived and designed by Toshio Iwai, who went on to design Sim Tunes for the PC (originally the canceled Sound Factory for the SNES), and Electroplankton for the Nintendo DS. Otocky is notable for being the first to include creative/procedural generative music. Through association with different game mechanics and player actions, the game plays quantized-in-time musical notes in a variety of digitally synthesized voices. Otocky is a precursor of Rez, Tetsuya Mizuguchi's 2002 Dreamcast and PlayStation 2 game exploring similar themes of player action and musical evolution.

Rather than trying to make sense of the scenario, or what the spaceship is supposed to be and who it's fighting, Otocky is meant to be simply enjoyed at a sensory level. It can be described as a musical side-scrolling shoot 'em up. The player's spaceship has a ball for a weapon, which can be fired in eight directions; each direction corresponds to a different musical note. The note plays when the player presses the fire button, and is also quantized in time so that it matches the beat playing in the background. By using the weapon selectively the player can improvise music while playing.