The object of each stage is to completely fill your note meter at the bottom of the screen until you can see five full note icons. Once this occurs, the screen will flash, and you will immediately exit the stage from wherever you are, and initiate a boss battle. To collect notes, you must fire your bubble beam at note bubbles. For each note bubble that you collect, your note meter will fill up according to how many notes were on the bubble. In the event that you complete the stage before you fill up your meter, the stage will loop to the very beginning again, only this time any note bubble that you already collected will be replaced by an enemy. The stage will loop indefinitely until you manage to fill your meter. The longer it takes, the harder it becomes, since more and more note bubbles will be replaced by enemies as you collect them. It is not uncommon to have to loop through a stage once, but you should avoid the need to loop through it two or more times. Take a mental note of the bubbles you missed and be sure to collect them on the second pass through the stage. 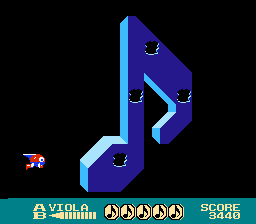 Boss battles are conducted on a single screen. Otocky must fight against a giant note, or some other musical symbol. The note or symbol will have holes in it. You must fire you bubbles into these holes. Every time you successfully hit a hole, your note meter will decrease. The boss will be defeated when you fully deplete your note meter. The boss will move left and right, or it will move up and down. On occasion, 4 enemies will spawn from one of the nearest holes, and spiral outward. While your special B button weapon is useless against the boss, it can still be used against the spawned enemies. In later levels, the number of spawned enemies will increase to 8. Other than the number of enemies which appear, and the shape of the symbol in question, all boss fights are identical, from the first stage to the last.