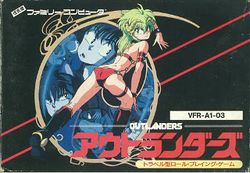 Outlanders (アウトランダーズ, Outlanders?) is a action role playing game developed by Victor Interactive for the Famicom and published in late 1987. It roughly follows the plot and story line of the mange and anime of the same name. You play through the game as Wakatsuki Tetsuya, and you are guided throughout the game by the short alien servant that is present in the original story. It was only published in Japan, and it was never translated into any other language.

Outlanders is not considered a particularly well made game. The mechanics of combat are particularly rough. While fighting is performed in the familiar top-down view, made famous by The Legend of Zelda, collision detection does not work the way you'd expect it to. You must stand in one place, and hold a button down to continuously swing your sword. You will not be able to hit an enemy unless you are somewhat lower than them. Hitting them when you are eye to eye will result in you taking all of the damage. Commands must be issued for every little action, such as picking items up off the ground from defeated enemies.

Outlanders (written by Johji Manabe) tells the story of alien Princess Kahm and Tokyo News Photographer Wakatsuki Tetsuya as they try to save the earth from the invasion forces led Kahm's father, emperor of the interstellar Santovasku Empire. The Santovasku use giant organic spaceships, or "Biomech," and they utilize both their advanced technology as well as their mastery of sorcery in their assault on Earth. Wakatsuki Tetsuya discovers from Kahm that her ancestors in fact came from earth and they've returned to reclaim their sacred home planet that mankind has subsequently spoiled (due to pollution).