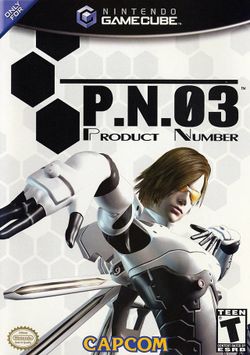 P.N.03, short for Product Number Three, is a 2003 video game developed by Capcom for the Nintendo GameCube. P.N.03 is a third-person shooter featuring a dexterous, cybernetically-enhanced woman named Vanessa Z. Schneider who the player controls to destroy a series of robots. The game was designed to have a "classic" feel through use of use things such as point combos for destroying multiple enemies in a row. It is part of Shinji Mikami's Capcom Five, a selection of five 2003 Capcom games intended to be exclusive for the GameCube. Eventually though, P.N.03 ended up being the only Capcom Five game not to be ported to the PlayStation 2.

P.N.03's gameplay is defined by the restrictions placed on players and enemies. Players cannot attack while moving, but have a variety of evasive maneuvers such as flips and spins. Similarly, enemies' attacks and movements are restricted to specific patterns. The game encourages use of cover while enemies are attacking, followed by carefully-timed attacks. As the player becomes more skilled, it is ultimately possible to predict and evade incoming enemy fire while in the open. Enemies destroyed may drop items replenishing the player's barrier or energy. A combo counter provides cumulative bonus points for destroying enemies consecutively (a timer appears between enemies being destroyed; when it reaches zero, the current bonus points are granted to the player and the score reset). Additional bonuses are given upon clearing a room. 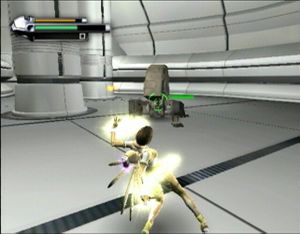 Vanessa in the Prima Blazer Aegis suit using the Harrier energy drive against an ASS-13G Seerose.

The game also features a variety of "energy drives", special moves which render the character indestructible during their execution and then either launch an attack or grant a temporary status for the character (e.g. invincibility and double damage). These drain the player's "energy" bar.

There is also an assortment of Aegis suits which may be acquired or upgraded in exchange for points earned. As each suit has pre-set restrictions on which upgrades are possible for it, and use different energy drives, they are suitable for different situations.

The game's structure uses a series of pre-set levels, each consisting of pre-fabricated rooms populated by a fixed number of enemies which do not re-appear in the level once eliminated, and may include one or more bosses. If the player dies in these levels, they may reload or use a continue to restart at the last completed room. Upon reaching the end of the level, the player receives a ranking and score based on their success in the mission.

Between missions, players can shop for upgrades, new Aegis suits, and extra continues with their points earned. There is also the option to play trial missions, an assembly of 15 randomly-selected rooms each populated by enemies. These missions provide practice and additional points for the player to use in the shop.