From StrategyWiki, the video game walkthrough and strategy guide wiki
(Redirected from Pac-Gal)
Jump to navigation Jump to search

When Pac-Man was still hot in the arcades, a small company known as GCC, or General Computer Corp., was in the business of making arcade "enhancements" which were essentially small hacks designed to make certain games more appealing. GCC was known for an add on that they had sold for Atari's Missile Command when they sat down to design a hack for Pac-Man. They surprised themselves with the quality of their hack, which they had entitled "Crazy Otto", and pitched their idea to Midway Games.

Midway was hungry to cash in on the Pac-Man phenomenon that was occurring at the time, and Namco's own sequel to Pac-Man, Super Pac-Man, was still a few months out of development, so they bought the rights to "Crazy Otto", and renamed it Ms. Pac-Man in an effort to entice more females to play arcade games. Namco was made aware of the alteration, and after a number of years, the rights of Ms. Pac-Man were handed over to Namco. Ms. Pac-Man was not quite as acknowledged by Namco in Japan until very recently when it seems, in perhaps a nod to the newer game's popularity and quality, it began appearing in select Namco Museum compilations, for the Sony PlayStation.

Ms. Pac-Man expands on the original Pac-Man, in the following ways: instead of one static blue-on-black maze, there are now four multi-colored mazes to complete; instead of a bonus appearing stationary below the ghost regenerator, it now bounces in through a tunnel, takes a few laps around the regenerator, and eventually bounces back out through another tunnel if not eaten; instead of just one escape tunnel, there are (in all but one of the mazes) two sets of tunnels; lastly, Ms. Pac-Man introduces an element of randomness to the ghost behavior which eliminated the effectiveness of patterns that crippled the earning power of the original Pac-Man.

Ms. Pac-Man was considerably faster than Pac-Man as well, but some players felt that it wasn't fast enough. Hackers began to offer unofficial EPROM upgrades that sped the game up. Most of these mods sped up Ms. Pac-Man herself, but not the ghosts, which made the game easier and more attractive to novice players.

As with the original Pac-Man, there really is no story element per se, but the intermissions that you are treated to tell the story of how Pac-Man and Ms. Pac-Man meet while being chased, fall in love, and have a child together (dropped off by a passing stork). 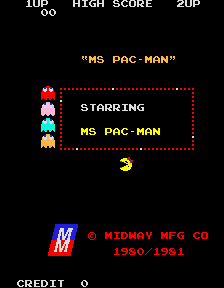