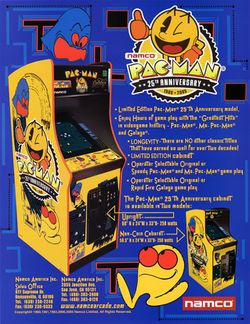 Pac-Man: 25th Anniversary is a compilation arcade game, that was released by Namco in 2005; as its name implies, it was released to mark the twenty-fifth anniversary for their most successful stand-alone arcade game, Pac-Man, and features a carbon copy of it (along with two more of Ms. Pac-Man and Galaga), in a cabinet with a Pac-Man-inspired artwork on its left side (and a Galaga-inspired one on its right one, even though Galaga does not have a connection to the Pac-Man series whatsoever).