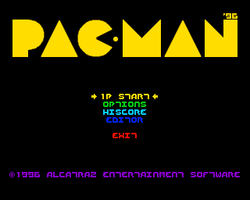 Pac-Man '96 is an action game, released by Alcatraz Entertainment Software upon the Commodore Amiga in 1996 only in Austria; as its name suggests, it stars Namco's signature character, Pac-Man, and in the spirits of his early official titles, the player must direct him around several two-dimensional mazes while avoiding four ghosts (who are Blinky, Pinky, Inky and Funky from the official games). In addition to having several types of bonus items which appear beneath the ghosts' regenerator, there is also an "EDITOR" mode which allows the player to modify the existing levels and create their own ones - and some of the mazes even showcase normally-invisible barriers that will only light up when Pac-Man is close to them. On pausing the game the player can change the volume of the music and effects, along with the music itself; two of the songs are also called Blaue Elise and Dummvogel, the German names for The Ant and the Aardvark and Crazylegs Crane, as they are Amiga renditions of those animations' theme songs. After every fourth level there is a cutscene in the spirit of those from the inceptive Pac-Man, Super Pac-Man, and Pac-Mania - and once the thirty-second level has been cleared, the text of "CONGRATULATIONS YOU FINISHED ALL LEVELS! BUT..." will appear at the top of the screen above its last cutscene (which shows Pinky squashing Pac-Man with a mallet, and the text "TRY AGAIN!" will then appear below the text of "YOU FINISHED ALL LEVELS!" before the game starts again at a higher level of difficulty). The game will continue until Pac-Man loses his last life; however, because he receives an extra one at 20000 points and every 50000 points thereafter, the game may go on forever as long as the player can keep reaching scores that end in 20000 and 70000 (therefore, the closest thing that a player can get to finishing it is reaching 99999990 points).