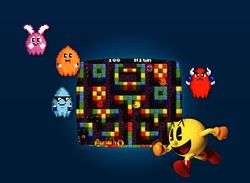 Pac-Man Arrangement is, as its name suggests, an update of Namco's most successful standalone arcade game, Pac-Man; it was originally released in 1996 as a part of their compilation arcade game Namco Classics Collection Vol. 2, which was the last of only two games to run upon ND-1 hardware, and borrowed some features from SemiCom's unauthorized sequel, Hyper Pac-Man (like two-player simultaneous play, where the second player can control a fluorescent green Pac-Man, special bonus items that appear in the Pac-Mans' starting positions and a boss battle at the end). A new ghost who was known as "Hinekure" and "Kinzo" or "?????" and "Kinky" in the US version was also introduced, who wore sunglasses, and despite being coloured yellow on the title screen, was always edible (and he appeared as blue in the game) - he would materialize in the ghost regenerator as the background noise from the original Pac-Man and Super Pac-Man started to be heard from the C352, and if either of the Pac-Mans ate him, he would act as a power pellet, turning the four returning ghosts vulnerable (Sue, Funky, and Spunky did not return for this game!). However, if neither of the Pac-Mans ate him, before he reached the ghost he was heading for, he would "meld" with him, turning him into a super-powered ghost in the process; the American version of this game is the only Pac-Man game to have a Clyde/Blinky error on its title screen but this guide will refer to them by their proper names to avoid confusion. Blinky (red) took on the look of an angry bull, and could charge horizontally towards Pac-Man if he was in the same aisle as him, while Pinky took on the look of a rabbit and could jump from his current position to (one of the) Pac-Mans', Inky gained a pair of dark glasses and could spawn a transparent clone of himself on the other side of a maze (that disappeared when a power pellet was eaten) and Clyde (orange) would become obese and attempt to slow the Pac-Mans down by spitting out larger 20-point pellets - and the last round saw the ghosts employing an enormous robotic ghost called the "Emperor Ghost" against the Pac-Mans (initially by unleashing a group of red sunglasses-wearing ghosts, but after 57 pellets had been eaten, a pellet, with the letter "S" on it would appear in the maze as the Emperor Ghost unleashed a second group of pink sunglasses-wearing ghosts, and once either Pac-Man ate the "S" pellet, the initial red group would explode as they emitted a Cosmo Gang-style "AÏE!" scream. Once 114, 171 and 228 pellets were eaten, three more "S" pellets would appear, in turn, as the Emperor Ghost decided to unleash two more groups of light blue and orange sunglasses-wearing ghosts; once the last "S" pellet had been eaten, the Emperor Ghost would refill the maze and send both Pac-Mans back to their starting positions, then start following them around the maze (as they ate the pellets, they flew towards the Emperor Ghost as he emitted more Cosmo Gang-style "AÏE!" screams, and after 57 and 114 pellets had been eaten Clyde and Inky would turn blue. However, after 171 pellets were eaten (and Pinky was turned blue) the Emperor Ghost would start flying randomly around, as a remix of the original intermission theme started to be heard - and once 228 pellets were eaten, Blinky would turn blue and a powerup (resembling the two Pac-Mans) would appear at a random position in the maze. Once either of the Pac-Mans ate this, the Emperor Ghost would start jumping up and down in mid-air, then explode as the four ghosts were thrown off him and sixteen pairs of eyes, presumably those of the sixteen sunglasses-wearing ghosts, flew up off the top of the screen; the Pac-Man who ate the powerup would also receive 100000 final points. This game was also included in the Pac-Man Collection for the Game Boy Advance in 2001 but the second player and ending bonuses were removed, as well as in the Namco Museum on Xbox, PS2 and GameCube - and, in 2005, a new game that had the same title as this one, but was completely different from it, was released as part of the Namco Museum Battle Collection for the PlayStation Portable.