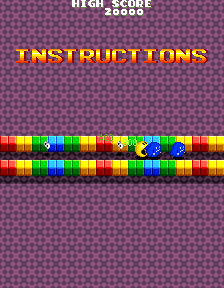 Once you have inserted your coin(s) into a cabinet of Namco's 1996 compilation arcade game Namco Classics Collection Vol. 2 and pressed either Start Button, the game selection menu will appear on Pac-Man. Once you have pushed the button to confirm your choice, the Pac-Man mode selection menu will appear upon "Original" mode (a recreated version of the original Pac-Man), so you will have to push your joystick to the right to select "Arrangement" mode and press the button to confirm your choice. Once you've done so, the five ghosts shall fly into view from the left side of the screen as their names appear to their right sides. Kinky, the new ghost, is yellow, even though he is eatable at all times, so he will appear blue and vulnerable. Also, Blinky and Clyde's names are mistakenly swapped in the US version but this guide will refer to them by their original names to avoid confusion. The text "PUSH 1P OR 2P START BUTTON!" shall also flash up below them. Once you have pressed either Start Button again (1P's to start the game as Pac-Man himself, or 2P's to start it as a fluorescent green version of him), you'll be treated to this game's opening cutscene, shown in the screenshot above (Kinky comes into view from the right side of the screen, as he is chased by Pac-Man, who in turn is being chased by the other four ghosts. Once he has eaten Kinky, the others become vulnerable, and he turns around to eat them). In the GBA conversion of the game (which removed the second player's Pac-Man and was released as part of Pac-Man Collection in 2001), an updated remix of the original game's opening theme will be heard at the start of the first round.

Initially, Kinky only has two chances to meld with one ghost per round, but he'll gain additional ones to meld with multiple ones as the game progresses.

For the next four rounds, Kinky will have three chances to meld with two of the ghosts, which could mean more trouble for the Pac-Mans if he succeeds.

For the next four rounds, Kinky will have four chances to meld with three of the ghosts, which could mean more trouble for the Pac-Mans if he succeeds.

For the next four rounds, Kinky will have five chances to meld with all four of the ghosts, which can mean more trouble for the Pac-Mans if he succeeds.

For the next four rounds, Kinky shall have six chances to meld with all four of the ghosts, which can mean more trouble for the Pac-Mans if he succeeds. 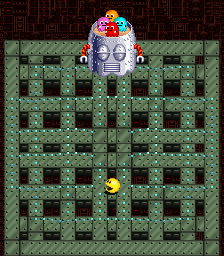 This maze contains 228 pellets and has two parts. Once the Emperor Ghost has landed, it will fly to the top and release four red Kinky clones. Once 57 pellets have been eaten, a pellet with the letter S on it appears in the centre of the maze and the Emperor Ghost will release four pink Kinky clones. Once either Pac-Man consumes the pellet the red ones will explode and emit a Cosmo Gang-style "AÏE!" scream. Once 114 and 171 pellets have been eaten, two more S-pellets will appear as the Emperor Ghost releases four cyan and orange Kinky clones respectively. Once they've both been eaten, the pink and cyan ones will explode, and emit two more Cosmo Gang-style "AÏE!" screams. Once all 228 pellets have been eaten a fourth (and last) S-pellet will appear. When eaten, the orange Kinky clones shall explode and emit a fourth and final Cosmo Gang-style "AÏE!" scream. The Emperor Ghost will then descend to the centre of the maze, and refill it with green pellets as both Pac-Mans are sent back to their starting position. It is also worth noting that although the Emperor Ghost does nothing to threaten the Pac-Mans in the first part of the round touching it is lethal.

BUT
THE GAME NEVER REALLY ENDS.

SOMEONE,
SOMEWHERE
IS BEING CHASED BY MONSTERS!

THE NAMCO STAFF
THANKS YOU FOR PLAYING!

After the credits have finished, the game will go into high-score mode. Your scores will most likely be the two highest ones on the cabinet to date, so you should enter your initials at the top of the table with pride, regardless of which way around they are positioned. Once you have done so, the game will go back into attract mode and display this game's three highest scores below those of the recreated original game (much like the true original, this does not allow players to enter their initials) - and the recreated versions of Rally-X and New Rally-X also do not allow players to do this, but that of Dig Dug does. This game was also to be the last arcade Pac-Man title until Pac-Man: Battle Royale, released to commemorate the series' thirtieth anniversary, in 2010.