From StrategyWiki, the video game walkthrough and strategy guide wiki
Jump to navigation Jump to search
Pac-Man Plus | Table of Contents | Gameplay | Walkthrough 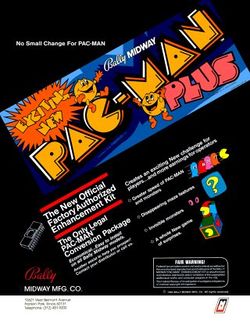 Pac-Man Plus is an action game that was released for the arcades in 1982 by Midway Games. As with Ms. Pac-Man before it, it was created without the authorization of Namco, the original creators of the Pac-Man series. A new wave of arcade bootlegging (where unauthorized copies of the game were manufactured at a tremendous rate to illegally cash in on the fad) was introduced at the height of Pac-Man's popularity. While many bootlegs were carbon copies of the original, some bootlegs (New Puck-X and Hangly-Man for example) actually modified the game to introduce some new wrinkles in an effort to make it more interesting and attract expert players of the original game who now wanted a new challenge.

While Bally Midway had proceeded with the manufacturing of Ms. Pac-Man, against Namco's wishes, they also sought to stem the flow of bootlegs by producing an officially licensed upgrade to Pac-Man, which they named Pac-Man Plus. As far as Namco were concerned, Super Pac-Man was their true sequel to Pac-Man, and this upgrade was also unauthorized. But nevertheless, Midway proceeded to sell Pac-Man Plus to feed the demand in the U.S. for more Pac-Man products, as Super Pac-Man wasn't performing as well in the United States as Midway hoped.

The changes to Pac-Man, as seen in Pac-Man Plus, range from drastic to subtle, and are all detailed in this guide. Since Pac-Man Plus was merely seen as a stop-gap solution to the bootleg arcade problem, and Ms. Pac-Man gained popularity by the time Plus was released, it wasn't seriously considered for home conversion. No official conversions were made around that time. More recently, homebrew programmers have released conversions of older Atari games in to Pac-Man Plus. It was also included in Jakks Pacific's 2006 Super Pac-Man TV game, along with Pac-Man, Ms. Pac-Man, Super Pac-Man, and Pac & Pal.