From StrategyWiki, the video game walkthrough and strategy guide wiki
(Redirected from Pac Man)
Jump to navigation Jump to search

This is the first game in the Pac-Man series. For other games in the series see the Pac-Man category.

Inspired over a lunch of pizza, Pac-Man (originally entitled Puckman in Japanese) began life in the arcades in 1980. It was designed by Toru Iwatani, who had previously designed the Gee Bee trilogy, and was the first Namco game to incorporate a four-way joystick. After being overlooked by "experts" who judged Namco's own Rally-X to be the better of the two games, Pac-Man went on to unprecedented success and became an icon in Japan and in America. Pac-Man's game play was a stark and refreshing contrast to the space aged shoot'em ups that were popular at the time. Pac-mania became a phenomenon and video games' first mascot was met with an insatiable demand.

Atari snapped up the rights to bring the arcade hit home, and let down millions of fans with a sub-par conversion on what was their most popular home system at the time, the Atari 2600. However, they did produce a far better conversion for their home computer systems and the Atari 5200 (if you can overlook the controls). From that point onward, Pac-Man has gone on to grace just about every video game system that has ever been manufactured in some form or another, including the WVC.

While Pac-Man's popularity has died down these days (in comparison to the early Eighties), he is still a recognizable figure, and has appeared on just about every form of merchandising available. His legacy continues on the latest generation platforms with ever-expanding adventures, and while they capture the good-natured quality of our little yellow hero, they can never outshine the accomplishment of the original games. Despite Pac-Man's popularity, no official explanation has ever been provided by Namco as to why Pac-Man has to run around a maze, gobble the pellets, and avoid the ghosts.

Between Friday 21st and Sunday 23rd May 2010, Google celebrated Pac-Man's 30 birthday by supplying their first ever interactive Google Doodle; a Google inspired Pac-Man maze that can actually be played by one or two people. The first player controls Pac-Man using the arrow keys while a second player can control Ms. Pac-Man simultaneously using the W-A-S-D keys. The specially-designed maze contains 270 pellets (275 if you count the power pellets), and contains five power pellets instead of usual four. 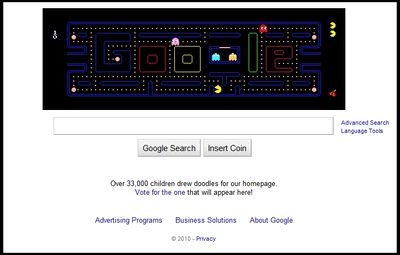 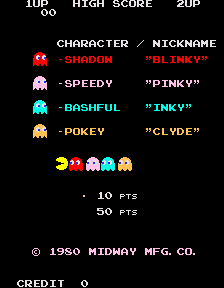