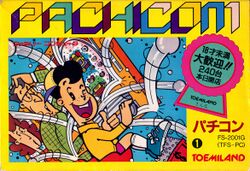 Pachicom (パチコン, Pachikon?) is a parlor game released for multiple platforms that is themed around pachinko. It was released in 1985 exclusively to the Japanese market. The game of pachinko is popular in Japan. It combines elements of pinball with an elements of slot machines which adds an aspect of gambling. There are four different gameplay modes to choose from (two of them assign a player with a pachinko machine while the other two allow players to choose their own machine).

The game is based on standard pachinko rules, replicating the experience of playing pachinko in a parlor. The game board has a layout with nails sticking out. Metal balls would either of or fall in between the holes created by the pegs in order to traverse the board. Certain compartments are added to the board. Should a metal ball find its way to one of these compartments, the player will receive points that are similar to credits on a slot machine. Players can expect to lose that ball (and a point) if it falls below the bottom of the board. Initially, the player starts off with one hundred balls (points).

In Mode A, the clock goes forward from 000000 seconds until it reaches 999999 seconds (the equivalent of either 16666.65 non-real time minutes, 2777.775 non-real time hours, or 115.740625 non-real time days). Once that occurs, the game is over and any remaining points are stored in the top three score list. Mode B is the same except that the clock goes backwards from 999999 seconds all the way back to 000000 seconds. It is very easy to mash the "A" button repeatedly along with the direction pad to the right in order to accumulate mass winnings from the pachinko games and "cheat" the system.

A programmer of this game hid inside the ROM a separate series of sound effects which apparently the management did not like and forced him to change. In protest, the programmer left the following message to ROM hackers inside the code teaching them how to enable the other sounds effects. The translated message is as follows:

You RETARDS say one thing, then something else later all the time. You're a sound company; quit ignoring pachinko sounds and trying to put these weird sounds in instead! Do you WANT it to be this hard to hear the balls?! I've left the PREVIOUS sounds, so edit this if you want to hear it. Set hex address AFFC to 1FAF and AFC4 to E0EE to get decent sounds.