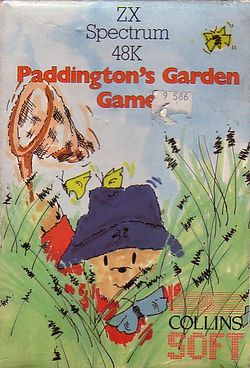 Paddington's Gardening Game is an action game, that was released by Collins Soft for the Sinclair ZX Spectrum and Commodore 64 in 1984; it is based on the book series of the same name (and to a lesser extent, the FilmFair television series it begat, which aired on BBC1 from 1975 to 1978, but had returned for a twenty-minute special in 1980 by this point).

The Commodore 64 version of the game shows its name as Paddington's Garden Adventure on the title screen when it is loaded - and it also depicts Paddington's remaining lives as fishing nets.

The player must use either a Kempston or Sinclair joystick or the Q, A, O, P, and Space keys to take control of Paddington, who is on a mission to catch all of the butterflies in that maze-like garden of the Browns, while avoiding contact with other creatures like wasps and hedgehogs (along with the flowerbeds, puddles and fountains that serve as the walls) - and yellow butterflies are worth 1 point while red ones are worth 2, purple ones are worth 3, green ones are worth 5 and cyan ones are worth 10. The "trademark" marmalade sandwiches are also worth 15 points, and once Paddington catches all the butterflies in the garden and returns to his starting point, you will be treated to a cutscene of him with a gold cup as the text "YOU HAVE WON" appears below it; the text of "BETTER RELEASE THE BUTTERFLIES NOW" will then appear at the bottom of the screen and the butterflies will fly away (it's also one of the shortest games ever made).