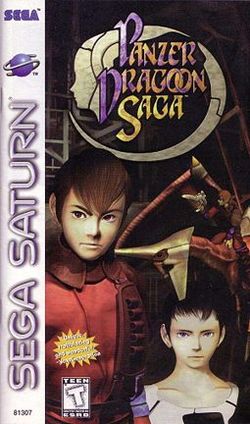 Panzer Dragoon Saga is a critically-acclaimed role-playing video game (RPG) released exclusively for the Sega Saturn in 1998. It was the third Panzer Dragoon game to be released, and so far remains the only game in the series that is not an on-rails shooter. Like the other Panzer Dragoon games on the Saturn, it was developed by Sega's internal Team Andromeda development studio. The team disbanded after Saga’s release.

The protagonist of the story (and the character whom the player controls) is Edge, a young soldier employed by the Empire. We find him at the beginning of the story on duty protecting an excavation site where Ancient artifacts are being recovered. After helping to fend off an attack from one of the wild mutant creatures within the cave where the excavation is being made, Edge discovers what seems to be the fossil-like embodiment of a young woman buried in a wall.

Before he can react, the excavation site is suddenly attacked by a rebel faction of mutinous troops from the Empire. Craymen, the faction's leader, orders his troops to seize the girl. Edge, along with the rest of his companions, are shot. As Edge is hit, he falls from the top of the cliff where he had seen them take the girl that he had inadvertently discovered earlier. He falls some distance into an underground reservoir. To his own surprise, he is apparently unharmed and manages to locate a gun to defend himself with. Then, attempting to find a way out, Edge is intercepted by a flying dragon. The dragon seems to be communicating with him on some spiritual level and, with its help, Edge decides to take revenge and decipher the mystery of the girl Craymen has kidnapped.