As with overworld exploration, the battles in Panzer Dragoon Saga take place while Edge is on the back of his Dragon.

The battles are a cross between turn-based and real-time fights; while you are free to move Edge around the enemies as and when you wish, your ability to attack or use items is controlled by an action gauge that must fill before any actions can be performed.

Your Dragon's health is measured in Hit Points. Each enemy attack that hits will decrease your HP, while certain items and Berserk Skills your dragon learns will replenish it.

Each time your Dragon increases a Level, its maximum HP will also increase.

Berserk Points are required to perform special actions called Berserk Skills, which can be both offensive and defensive in nature. Some will allow you to attack all enemies at once, others will heal your Dragon or increase its abilities temporarily.

Performing Berserk Skills will deplete your BP, depending on the strength of the attack or skill. BP can be replenished by using certain items, and your Dragon's maximum BP will increase as it levels up.

There are two heads-up displays available during battles:

during a battle will bring up an expanded Battle Menu HUD. 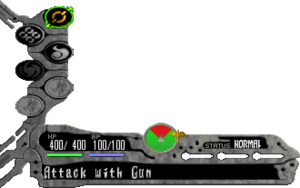 This HUD will pause the battle while it is displayed; you will be unable to move your Dragon and your action gauges will not fill, but enemies will not be able to attack either.

Radar isolated from the battle HUD

The radar in the middle of the HUD shows your position relative to the enemy or enemies you are fighting. The radar is divided into four quadrants, which are colored according to the risk you face while in them. Your dragon's current position is marked by a

around the edge of the radar.

Green areas are "safe" - any attacks by the enemy will be weak, and in some cases they will not be able to fire on you at all.

Red areas are high-risk. The enemy's most powerful attacks will be able to hit you while you're in a red quadrant, although the weak points of some enemies are only visible when you're exposed this way.

There are also quadrants with no color, where you will be open to an enemy's basic attacks, but are not in any great risk.