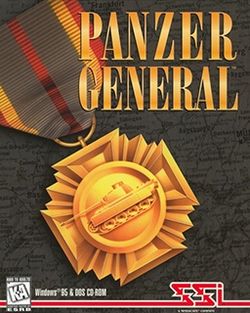 Panzer General is a computer wargame published by Strategic Simulations in 1994 and set in World War II. It is turn-based, set on operational level hex maps. One plays lone scenarios from either Axis or Allied side and against a computer or human opponent. In Campaign Mode, the player assumes the role of a German general against the Allied computer.

Panzer General is an operational-level game, and units approximate battalions, although unit size and map scale from one scenario to the next are elastic. While the names and information for the units are reasonably accurate, the scenarios only approximate historical situations.

Its novel feature was to link individual scenarios into a campaign spanning World War II from 1939 to 1945. Units are able to gain experience and become stronger, where success in one battle would award the player prestige to upgrade units, acquire additional units, and select a better scenario for the next battle.

In 1996, Panzer General won the Origins Award for Best Military or Strategy Computer Game of 1995. The game and its sequels spawned a loyal following, who have revived online head-to-head play and added many units, features, and over 2,500 scenarios. New ideas are still being developed well over a decade after its initial release.

Panzer General has 38 scenarios based on real or fictitious battles from World War II. The player can engage in a single battle or a campaign mode.

In Campaign Mode, a series of battles unfolds as a campaign heads to victory. There is one long campaign as Germany, with five starting locales:

The task in most scenarios is to take all objective cities in a given number of turns; taking them at least 5 turns earlier is considered a major victory. In scenarios from later stages of war, the Germans try to hold positions against a stronger enemy. A typical task is then "Hold at least two of our objective cities for 20 turns; for Major Victory, hold at least five."

All campaigns branch out and end either by the general being sacked for incompetence or end of the war. In Campaign Mode, a Major Victory could possibly change known historical events. For example, defeat in the 1940 Battle of France results in game over; after a Major Victory the player invades Britain; after a Minor Victory the player can either command the North African campaign or capture the Balkans and Greece and then invade Russia (Barbarossa). After a Major victory in Barbarossa the player can either convince the High Command to attack Moscow immediately (which costs him or her much prestige, needed for buying units) or attack Kiev and then Moscow (but then Moscow is surrounded by formidable fortifications).

If the player achieves a Major Victory both in Britain and in Moscow, he or she is allowed to invade Washington. In any other case, he/she must fight well in many battles to get another chance to attack them. If Britain or USSR survives this attack, they drive the Germans all the way back to Berlin. The best the player can do now is to fight well in each battle to have enough prestige for the next one - and to achieve a Major victory in the final defense of Berlin.

The game requires the player to use combined-arms tactics, where each unit is strong against some unit types but very vulnerable by others. Dug-in enemy positions must be softened by artillery, which is vulnerable and needs protection. Before attacking the infantry and anti-tanks, one needs to destroy the artillery which protects them from behind. If no tank can slip there, one does this mostly by bombers, but then it is advantageous to destroy the air defense units first. The fighters have a dilemma between destroying enemy air force and protecting the bombers.

One must carefully observe the road system to speed the advance, or he/she can use Bridge engineers to cross the rivers. The game rewards a Blitzkrieg strategy - penetrating deep into the enemy positions while postponing destruction of some of the encountered enemy units for later.

The performance of units is affected by their experience, which takes very long to collect. Particularly in Campaign mode one then has to protect the experienced units as the most valuable asset.