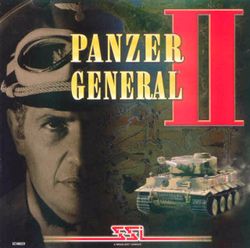 Panzer General II is a turn-based strategy computer game by Strategic Simulations, Inc. Released on September 30, 1997, Panzer General II is the sixth game in the "General" series and the first in the "Living Battlefield" series. It takes place during World War II, covering events from the Spanish Civil War in 1938 to hypothetical battles in 1946. In the April 2000 issue of the magazine PC Gamer, it was voted the 44th best computer game of all time. (The highest rating in the General series.)