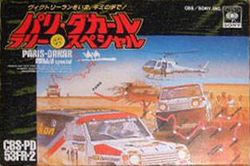 Paris-Dakar Rally Special is a rally racing game developed by ISCO for the Famicom and published by CBS Sony Group in Japan on February 1, 1988. It is an imaginative racing game with platformer and action-adventure elements. It features Dakar Rally cars that could fire bullets, a driver with the ability to exit the car and go exploring to lower a bridge or bypass other obstacles, underwater driving sections, and at times having avoid a fleet of tanks and fighter jets. Each stage features its own unique twist.