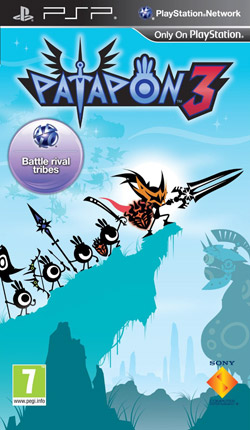 Patapon 3 (パタポン 3, Patapon 3?) is a rhythm game for the PlayStation Portable and sequel to Patapon 2. It was developed by Pyramid and Japan Studio and published by Sony Computer Entertainment. The game was first revealed during the Electronic Entertainment Expo 2010 as one of the 70 PlayStation Portable games released "between now and December." The game was released on April 12, 2011 in North America, April 15, 2011 in Europe and on April 28, 2011 in Japan.

Gameplay is mostly unchanged from previous titles, but there is a greater focus on multiplayer. A multiplayer demo was released on July 6, 2010, followed by a "100 Hour" demo on January 6, 2011. Patapon 3 is presented in a cartoonish, silhouetted two-dimensional environment designed by Rolito. The game features more realistic backgrounds.

Upon completing the bridge they constructed at the end of Patapon 2 the Patapons find a mysterious box. Upon opening seven evil spirits are released and turn all the Patapons to stone except Hatapon. A silver Hoshipon from inside the box revives Hero as Uberhero Patapon. With the help of Ton, Kan, and Chin (three other Patapons who were brought back to life), they endeavor to defeat the evil spirits.

Gameplay remains mostly the same from previous installments, with each face button representing a drum that is beat giving instructions to an army of Patapons. The main new addition being "Superhero Patapon," who acts as the player's avatar and is the character that physically beats the drums rather than the omnipresent god previously.

The multiplayer gameplay has been expanded and will feature more heavily. A competitive mode with four way battles has been added, complimenting the co-op system. Every level will be playable in multiplayer mode and can be played by a single player or with a total of eight players. It can be played over the internet or locally with another PlayStation Portable. Progression of characters is based on a new experience point system.

Communication in the multiplayer mode is done via a "Pata-Text" chat system.