Peasant's Quest is a web browser adventure game developed by the fictional company Videlectrix. Peasant's Quest can be played at the official website, or in fullscreen.

As taken from the game:
"You are Rather Dashing, a humble peasant living in the peasant kingdom of Peasantry. You return home from a vacation on Scalding Lake only to find that Trogdor the Burninator has burninated your thatched roof cottage along with all your goods and services. With nothing left to lose, you swear to get revenge on that Wingaling Dragon in the name of burninated peasants everywhere. You head east towards the mountain atop which Trogdor lives." 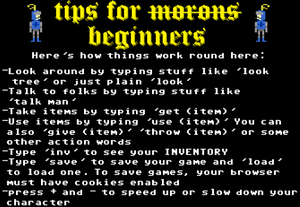 Use  ↑ / ↓ /←/→ to move. You will keep moving in that direction (regardless of whether the key is held) until you hit something, enter some text, press another direction, or push the same direction again.

Type save to save, and load to load, then use

to choose a slot. You must have cookies enabled in your browser in order to save.

You begin the game in Mountain pass. Talk to the knight, you'll be told that he won't let anyone except peasants enter Trogdor's mountain. According to him you obviously aren't a peasant because you don't smell like a peasant, you don't dress like a peasant, and you certainly aren't on fire like a peasant!

If you return to your burninated hovel (south two screens, west three screens, north one screen) you'll find a non-burninated scrap of paper that turns out to be a map. Simply type map at any time to look at it. This will only reveal locations already explored, so you will have some walking to do. Watch out for the Kerrek while doing this, you'll die if he gets near you.

At the top of the screen you'll notice the score is out of 150. You don't have to achieve this score to finish the game (you can finish with a minimum score of 133), but it is a possible goal.

From your hovel head two screens east and one screen south. Type Open to open the door and walk on in, this is Baby lady cottage. Type talk to talk to the woman and she'll tell you that her riches were stolen by the Jhonka and that if you get them back she'll reward you. While inside type get chicken feed to grab a handfull (1 point). When you leave she'll inform you that there's something she lost in the yard, and you can have it if you find it. Walk out, then type get berries next to all four bushes and in the final one you'll find the Super Trinket (2 points).

Moving one screen north you come to a lake with a man fishing. Use the chicken feed on the water and he'll catch a fish (2 points). Head one screen west and grab the pebbles (you need to stand near them to do this) (1 point). Also, see what happens when you type throw baby.

Head north and you'll find an archery range. Talk to the man there and he'll ask you to tell his brother "Haldo" if you see him (2 points). Note: make sure you do this after you have done something worth at least 2 points. If this is the first thing you do, or you have only grabbed the feed and pebbles, you will only gain 1 point, and will not be able to achieve the full 150 points.

Move north one screen (walk between the counter and the last target) to find a well. Turning the crank does nothing, so throw the pebbles into the bucket (2 points). Turn the crank this time to get the Monster Maskus.

Make your way two screens to the left. You might run into the Kerrek doing this, and right now he'll kill you if he catches you. To avoid him go back to the well and go one screen south, two west, and one north. You'll end up at a horse called Poor Gary. Wear the Monster Maskus and he'll break a hole in the fence (2 points).

In order to win the archery game you have to hit 3 bullseyes in a single game. The flag in the background indicates the wind direction and strength, and how you should adjust your aim. When the wind is strong, aim the arrow on the outer edge of the blue ring. When the wind is weak, aim the arrow on the inner edge of the blue ring. When the wind is dead still, aim streight at the bullseye. To fire, Push Space and watch the arrows move up, then immediately push Space when it hits the red mark. The left-hand arrow will stay there and the right-hand one will go to the top and come down again. When it does hit Space the moment it hits the red mark. You can keep playing as many times as you need to. Once you win they reward you with the SuperTime FunBow TM (3 points).

You can now kill the Kerrek. You can take various routes to get there, but don't go to him just yet. When you're on a screen just before him, type shoot kerrek. Once you've typed this head onto his screen and hit Enter (you could of course go onto his screen and type it then if you're fast enough, but otherwise he'll kill you). If for some reason the Kerrek isn't there, leave the screen and come back. Anyway, the Kerrek should end up dead (5 points). It now starts to rain. Look at his corpse and take the belt. Congratulations, you now smell like a peasant (10 points).

Head south one screen and you'll find that the cracked dry mud puddle is now moist. Walk over it to slip and be covered with mud (2 points). Head west one screen and hide in the hay bale (3 points).

Head south one screen to find the Jhonka and his riches. Simply grab the loot. The wind will blow the hay away and the Jhonka will ask you if you took his riches. Just type no and he believes you (7 points).

Head east three screens and south one screen to the cottage with the crunch berries. Go inside and give the woman the riches. She ends up running off with the riches and leaving you the baby as your "reward" (5 points).

Head back outside and go north one screen, then east one screen. The innkeeper is no longer gone fishing, so you can now enter the inn. Give the baby to the innkeeper and he will give the baby some pills, which you promptly take for yourself (optional step: 5 points).

Move two screens west and one screen north to a cottage with no doorknob and shotty stonework. Inspect the stonework and then move the stones (2 points). Use the baby and he'll knock over a broom, which in turn knocks the door open. The baby then crawls off, never to be seen again (5 points). Go inside, open the dresser, and get the robe (10 points). Put on the robe. Congratulations, you now look like a peasant (3 points). Don't forget to close the dresser (optional step: 1 point).

Move 4 screens east and one screen north and you'll be back at the inn. Open the door and go inside. Get a room from the innkeeper (3 points). It will soon be nightfall. Inspect the pantry and grab the grease, which falls on your head (2 points). Your controls are now messed up (although not reversed, as in many games): down and left are swapped, as are up and right. Anyway, get to the door to remove it (3 points).

Head south one screen and you'll find the lantern is now lit. Walk under the lantern and you'll start to burn. Congratulations, you are now burning like a peasant (10 points).

Head north two screens and talk to the guard, who will now let you pass since you clearly look, smell, and are on fire like a peasant (7 points).

Head into the mountain pass. When the disk read errors pop up just keep hitting Enter. Save here (type save and choose a slot with

), as you can easily die in the next area. Climb the cliff, and rocks will immediately start falling. They usually tend to stay away from the center of the cliff, but still look out for them, they fall at random. You can't save (or otherwise type) while climbing, but the top is only 3 screens away (3 points).

When you reach the top, enter the cave. Head right and you will be stopped by the keepers of Trogdor. You can answer each of their trivia questions, or just give them their requested item; both give you the same points. The trivia questions are random, and if you guess wrong, you lose the game. The items they want in order are the meatball sub, the soda, and the pills. You will then receive the Trog-Shield (5 points), the Trog-Helm (5 points), and the Trog-Sword (5 points). Head right, into the beaded curtains.

You are now in the den of Trogdor the Burninator. Even asleep he is deadly, so don't get close to him, just throw the sword at him (7 points). Trogdor wakes up, unharmed by the Trog-Sword. You are left with nothing left to do but talk to Trogdor, who has a digitized voice (10 points).

Congrats, if you did everything right, you should have "won" the game with 150 points out of 150 points.