Developed and published by Atari in 1984. Game play is a little slow, but the collision between the sno-bees and the ice blocks that you push is a little more forgiving.

Developed and published by Atari in 1983. Considerably accurate, although the music is an original composition. Both versions are fairly identical.

Developed and published by Sega in 1992. Very accurate to the gameplay, but due to the resolution limitations, the sprites are twice as large as the ice blocks. 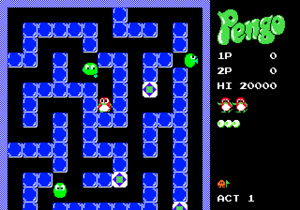 In December of 1995, Sega published an updated version of Pengo for the Sega Genesis in Japan, known as Pepenga Pengo. It contained an enhanced remake of the Pengo, as well as a close recreation of the original arcade game. The recreation scrolls vertically to accommodate the difference in vertical resolution.

Petch is a Pengo clone for the Commodore 64. It was developed by Colosoftware in 1983, and it was originally entitled Pengo, leading many to mistakingly believe that it was officially licensed. The name was later changed to Petch, presumably due to a lawsuit or the potential for one. It is very accurate to the arcade game.

Pengon was a Pengo clone developed for the Atari and Commodore computers by Microdeal in 1984. It lacks the polish of the official conversions. Enemies can spawn right on top of you resulting in frequent deaths.